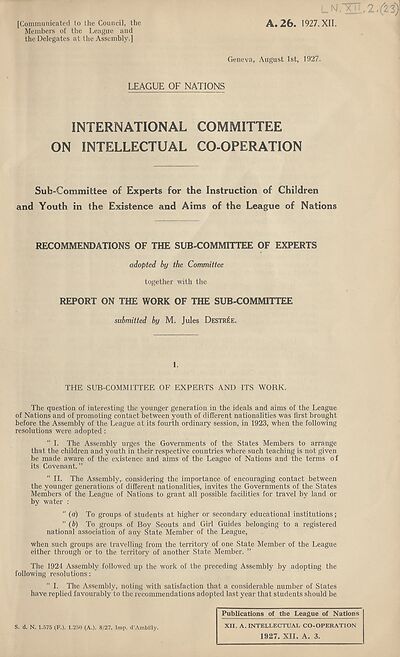 [Communicated to the Council, the
Members of the League and
the Delegates at the Assembly.]
A. 26. 1927. XII.
Geneva, August 1st, 1927.
LEAGUE OF NATIONS
INTERNATIONAL COMMITTEE
ON INTELLECTUAL CO-OPERATION
Sub-Committee of Experts for the Instruction of Children
and Youth in the Existence and Aims of the League of Nations
RECOMMENDATIONS OF THE SUBCOMMITTEE OF EXPERTS
adopted by the Committee
together with the
REPORT ON THE WORK OF THE SUBCOMMITTEE
submitted by M. Jules Destr£e.
1.
THE SUB-COMMITTEE OF EXPERTS AND ITS WORK.
The question of interesting the younger generation in the ideals and aims of the League
of Nations and of promoting contact between youth of different nationalities was first brought
before the Assembly of the League at its fourth ordinary session, in 1923, when the following
resolutions were adopted :
I. The Assembly urges the Governments of the States Members to arrange
that the children and youth in their respective countries where such teaching is not given
be made aware of the existence and aims of the League of Nations and the terms of
its Covenant.”
II. The Assembly,, considering the importance of encouraging contact between
the younger generations of different nationalities, invites the Governments of the States
Members of the League of Nations to grant all possible facilities for travel by land or
by water :
“ (a) To groups of students at higher or secondary educational institutions;
“ (b) To groups of Boy Scouts and Girl Guides belonging to a registered
national association of any State Member of the League,
when such groups are travelling from the territory of one State Member of the League
either through or to the territory of another State Member. ”
The 1924 Assembly followed up the work of the preceding Assembly by adopting the
following resolutions :
I. The Assembly, noting with satisfaction that a considerable number of States
have replied favourably to the recommendations adopted last year that students should be
Publications of the League of Nations
XII. A. INTELLECTUAL CO-OPERATION
1927. XII. A. 3.
S. d. N. 1.575 (F.). 1.250 (A.). 8/27. Imp. d’Ambilly.