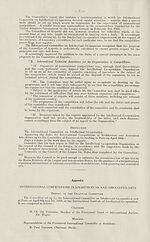 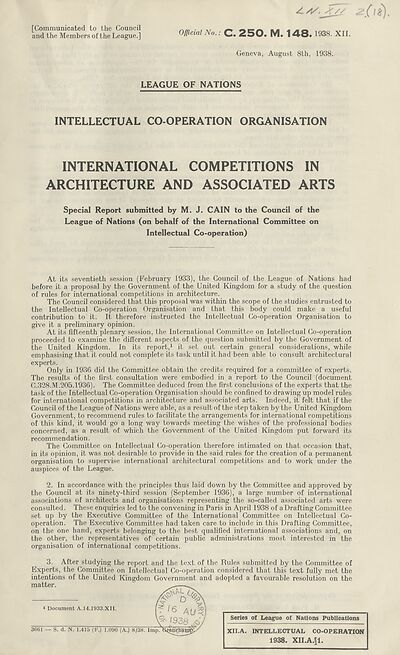 [Communicated to the Council
and the Members of the League.]
Official No.: C. 250. M. 148. 1938. XII.
Geneva, August 8th, 1938.
LEAGUE OF NATIONS
INTELLECTUAL CO-OPERATION ORGANISATION
INTERNATIONAL COMPETITIONS IN
ARCHITECTURE AND ASSOCIATED ARTS
Special Report submitted by M. J. CAIN to the Council of the
League of Nations (on behalf of the International Committee on
Intellectual Co-operation)
At its seventieth session (February 1933), the Council of the League of Nations had
before it a proposal by the Government of the United Kingdom for a study of the question
of rules for international competitions in architecture.
The Council considered that this proposal was within the scope of the studies entrusted to
the Intellectual Co-operation Organisation and that this body could make a useful
contribution to it. It therefore instructed the Intellectual Co-operation Organisation to
give it a preliminary opinion.
At its fifteenth plenary session, the International Committee on Intellectual Co-operation
proceeded to examine the different aspects of the question submitted by the Government of
the United Kingdom. In its report,1 it set out certain general considerations, while
emphasising that it could not complete its task until it had been able to consult architectural
experts.
Only in 1936 did the Committee obtain the credits required for a committee of experts.
The results of the first consultation were embodied in a report to the Council (document
C.328.M.205.1936). The Committee deduced from the first conclusions of the experts that the
task of the Intellectual Co-operation Organisation should be confined to drawing up model rules
for international competitions in architecture and associated arts. Indeed, it felt that if the
Council of the League of Nations were able, as a result of the step taken by the United Kingdom
Government, to recommend rules to facilitate the arrangements for international competitions
of this kind, it would go a long way towards meeting the wishes of the professional bodies
concerned, as a result of which the Government of the United Kingdom put forward its
recommendation.
The Committee on Intellectual Co-operation therefore intimated on that occasion that,
in its opinion, it was not desirable to provide in the said rules for the creation of a permanent
organisation to supervise international architectural competitions and to work under the
auspices of the League.
2. In accordance with the principles thus laid down by the Committee and approved by
the Council at its ninety-third session (September 1936), a large number of international
associations of architects and organisations representing the so-called associated arts were
consulted. These enquiries led to the convening in Paris in April 1938 of a Drafting Committee
set up by the Executive Committee of the International Committee on Intellectual Co¬
operation. The Executive Committee had taken care to include in this Drafting Committee,
on the one hand, experts belonging to the best qualified international associations and, on
the other, the representatives of certain public administrations most interested in the
organisation of international competitions.
3. After studying the report and the text of the Rules submitted by the Committee of
Experts, the Committee on Intellectual Co-operation considered that this text fully met the
intentions of the United Kingdom Government and adopted a favourable resolution on the
matter.
i Document A.14.1933.XII.
3661 — S. d. N. 1.415 (F.) 1.090 (A.) 8/38. Imp.
Series of League of Nations Publications
XII.A. INTELLECTUAL CO-OPERATION
1938. XII.A.fl.