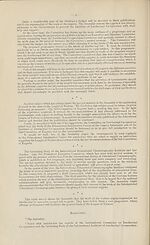 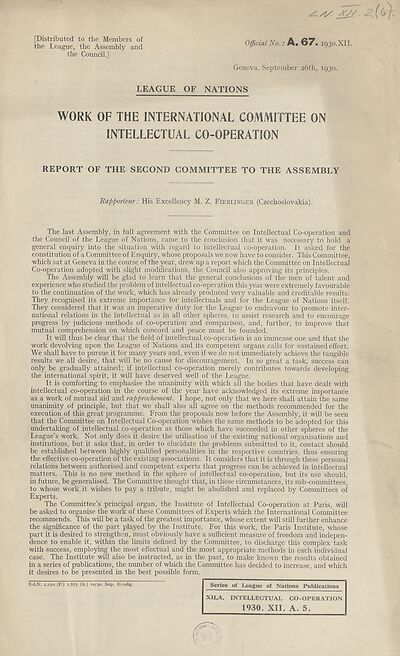 [Distributed to the Members of
the League, the Assembly and
the Council.]
x//
Official No.: A« 1930.XII.
Geneva, September 26th, 1930.
LEAGUE OF NATIONS
WORK OF THE INTERNATIONAL COMMITTEE ON
INTELLECTUAL CO-OPERATION
REPORT OF THE SECOND COMMITTEE TO THE ASSEMBLY
Rapporteur: His Excellency M. Z. Fierlinger (Czechoslovakia).
The last Assembly, in full agreement with the Committee on Intellectual Co-operation and
the Council of the League of Nations, came to the conclusion that it was necessary to hold a
general enquiry into the situation with regard to intellectual co-operation. It asked for the
constitution of a Committee of Enquiry, whose proposals we now have to consider. This Committee,
which sat at Geneva in the course of the year, drew up a report which the Committee on Intellectual
Co-operation adopted with slight modifications, the Council also approving its principles.
The Assembly will be glad to learn that the general conclusions of the men of talent and
experience who studied the problem of intellectual co-operation this year were extremely favourable
to the continuation of the work, which has already produced very valuable and creditable results.
They recognised its extreme importance for intellectuals and for the League of Nations itself.
They considered that it was an imperative duty for the League to endeavour to promote inter¬
national relations in the intellectual as in all other spheres, to assist research and to encourage
progress by judicious methods of co-operation and comparison, and, further, to improve that
mutual comprehension on which concord and peace must be founded.
It will thus be clear that the field of intellectual co-operation is an immense one and that the
work devolving upon the League of Nations and its competent organs calls for sustained effort.
We shall have to pursue it for many years and, even if we do not immediately achieve the tangible
results we all desire, that v/ill be no cause for discouragement. In so great a task, success can
only be gradually attained; if intellectual co-operation merely contributes towards developing
the international spirit, it will have deserved well of the League.
It is comforting to emphasise the unanimity with which all the bodies that have dealt with
intellectual co-operation in the course of the year have acknowledged its extreme importance
as a work of mutual aid and rapprochement. I hope, not only that we here shall attain the same
unanimity of principle, but that we shall also all agree on the methods recommended for the
execution of this great programme. From the proposals now before the Assembly, it will be seen
that the Committee on Intellectual Co-operation wishes the same methods to be adopted for this
undertaking of intellectual co-operation as those which have succeeded in other spheres of the
League’s work. Not only does it desire the utilisation of the existing national organisations and
institutions, but it asks that, in order to elucidate the problems submitted to it, contact should
be established between highly qualified personalities in the respective countries, thus ensuring
the effective co-operation of the existing associations. It considers that it is through these personal
relations between authorised and competent experts that progress can be achieved in intellectual
matters. This is no new method in the sphere of intellectual co-operation, but its use should,
in future, be generalised. The Committee thought that, in these circumstances, its sub-committees,
to whose work it wishes to pay a tribute, might be abolished and replaced by Committees of
Experts.
The Committee’s principal organ, the Institute of Intellectual Co-operation at Paris, will
be asked to organise the work of these Committees of Experts which the International Committee
recommends. This will be a task of the greatest importance, whose extent will still further enhance
the significance of the part played by the Institute. For this work, the Paris Institute, whose
part it is desired to strengthen, must obviously have a sufficient measure of freedom and indepen¬
dence to enable it, within the limits defined by the Committee, to discharge this complex task
with success, employing the most effectual and the most appropriate methods in each individual
case. The Institute will also be instructed, as in the past, to make known the results obtained
in a series of publications, the number of which the Committee has decided to increase, and which
it desires to be presented in the best possible form.
Series of League of Nations Publications
XII.A. INTELLECTUAL CO-OPERATION
1930. XII. A. 5.
S.d.N. 2.250 (F.) 1.875 (A.) 10/30. Imp. Kundig.