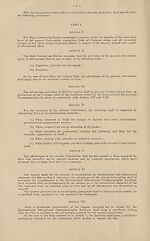 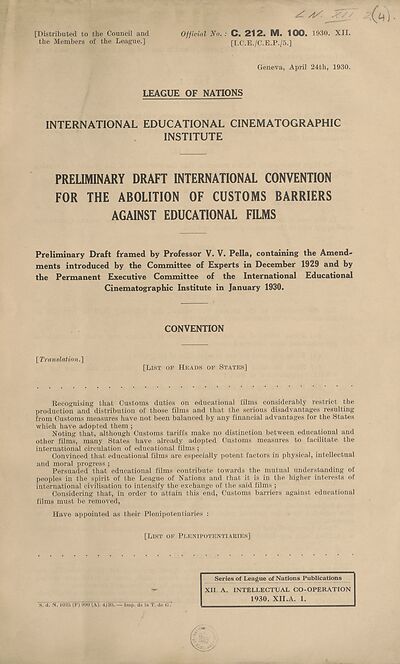 [Distributed to the Council and
the Members of the League.]
a/: x/y
Official No.: C. 212. M. 100. 1930. XII.
[I.C.E./C.E.P./5.]
Geneva, April 24th, 1930.
LEAGUE OF NATIONS
INTERNATIONAL EDUCATIONAL CINEMATOGRAPHIC
INSTITUTE
PRELIMINARY DRAFT INTERNATIONAL CONVENTION
FOR THE ABOLITION OF CUSTOMS BARRIERS
AGAINST EDUCATIONAL FILMS
Preliminary Draft framed by Professor V. V. Pella, containing the Amend*
ments introduced by the Committee of Experts in December 1929 and by
the Permanent Executive Committee of the International Educational
Cinematographic Institute in January 1930.
CONVENTION
[Translation.]
[List of Heads of States]
Recognising that Customs duties on educational films considerably restrict the
production and distribution of those films and that the serious disadvantages resulting
from Customs measures have not been balanced by any financial advantages for the States
which have adopted them ;
Noting that, although Customs tariffs make no distinction between educational and
other films, many States have already adopted Customs measures to facilitate the
international circulation of educational films ;
Convinced that educational films are especially potent factors in physical, intellectual
and moral progress ;
Persuaded that educational films contribute towards the mutual understanding of
peoples in the spirit of the League of Nations and that it is in the higher interests of
international civilisation to intensify the exchange of the said films ;
Considering that, in order to attain this end, Customs barriers against educational
films must be removed,
Have appointed as their Plenipotentiaries :
[List of Plenipotentiaries]
S. d. N. 10-25 (F) 990 (A). 4/30. — Imp. de la T. de G.
Series of League of Nations Publications
XII. A. INTELLECTUAL CO-OPERATION
1930. XII.A. 1.