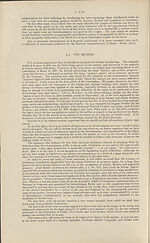 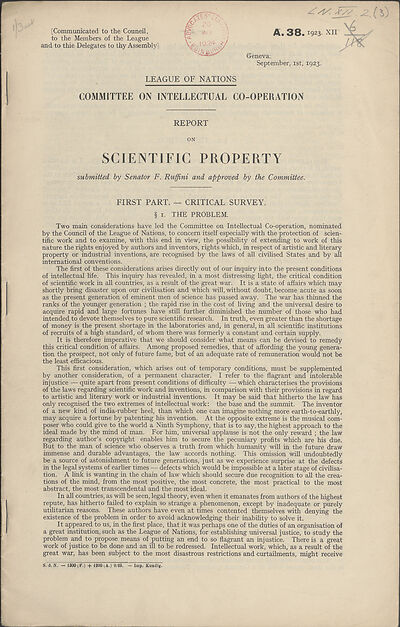 [Communicated to the Council,
to the Members of the League
and to thie Delegates to thy Assembly]
Geneva;
September, ist, 1923.
A. 38-1923- xii
LEAGUE OF NATIONS
COMMITTEE ON INTELLECTUAL CO-OPERATION
REPORT
ON
SCIENTIFIC PROPERTY
submitted by Senator F. Ruffini and approved by the Committee.
FIRST PART. — CRITICAL SURVEY.
§ 1. THE PROBLEM.
Two main considerations have led the Committee on Intellectual Co-operation, nominated
by the Council of the League of Nations, to concern itself especially with the protection of scien¬
tific work and to examine, with this end in view, the possibility of extending to work of this
nature the rights enjoyed by authors and inventors, rights which, in respect of artistic and literary
property or industrial inventions, are recognised by the laws of all civilised States and by all
international conventions.
The first of these considerations arises directly out of our inquiry into the present conditions
of intellectual life. This inquiry has revealed, in a most distressing light, the critical condition
of scientific work in all countries, as a result of the great war. It is a state of affairs which may
shortly bring disaster upon our civilisation and which will, without doubt, become acute as soon
as the present generation of eminent men of science has passed away. The war has thinned the
ranks of the younger generation ; the rapid rise in the cost of living and the universal desire to
acquire rapid and large fortunes have still further diminished the number of those who had
intended to devote themselves to pure scientific research. In truth, even greater than the shortage
of money is the present shortage in the laboratories and, in general, in all scientific institutions
of recruits of a high standard, of whom there was formerly a constant and certain supply.
It is therefore imperative that we should consider what means can be devised to remedy
this critical condition of affairs. Among proposed remedies, that of affording the young genera¬
tion the prospect, not only of future fame, but of an adequate rate of remuneration would not be
the least efficacious.
This first consideration, which arises out of temporary conditions, must be supplemented
by another consideration, of a permanent character. I refer to the flagrant and intolerable
injustice — quite apart from present conditions of difficulty — which characterises the provisions
of the laws regarding scientific work and inventions, in comparison with their provisions in regard
to artistic and literary work or industrial inventions. It may be said that hitherto the law has
only recognised the two extremes of intellectual work: the base and the summit. The inventor
of a new kind of india-rubber heel, than which one can imagine nothing more earth-to-earthly,
may acquire a fortune by patenting his invention. At the opposite extreme is the musical com¬
poser who could give to the world a Ninth Symphony, that is to say, the highest approach to the
ideal made by the mind of man. For him, universal applause is not the only reward ; the law
regarding author's copyright enables him to secure the pecuniary profits which are his due.
But to the man of science who observes a truth from which humanity will in the future draw
immense and durable advantages, the law accords nothing. This omission will undoubtedly
be a source of astonishment to future generations, just as we experience surprise at the defects
in the legal systems of earlier times — defects which would be impossible at a later stage of civilisa¬
tion. A link is wanting in the chain of law which should secure due recognition to all the crea¬
tions of the mind, from the most positive, the most concrete, the most practical to the most
abstract, the most transcendental and the most ideal.
In all countries, as will be seen, legal theory, even when it emanates from authors of the highest
repute, has hitherto failed to explain so strange a phenomenon, except by inadequate or purely
utilitarian reasons. These authors have even at times contented themselves with denying the
existence of the problem in order to avoid acknowledging their inability to solve it.
It appeared to us, in the first place, that it was perhaps one of the duties of an organisation of
a great institution, such as the League of Nations, for establishing universal justice, to study the
problem and to propose means of putting an end to so flagrant an injustice. There is a great
work of justice to be done and an ill to be redressed. Intellectual work, which, as a result of the
great war, has been subject to the most disastrous restrictions and curtailments, might receive
S. d. N. - 1300 (F.) + 1200 (A.) 9/23. - Imp. Kundig.