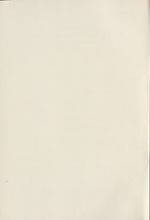 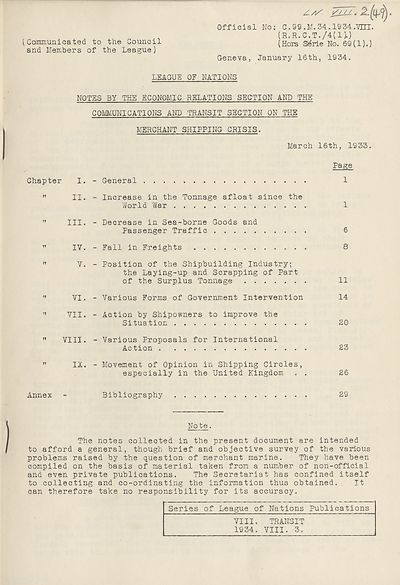 (Communicated to the Council
and Members of the League)
z// sjm-.
Official No: C.99.M.34.1934.mi.
(R.R. C.T. /4( 1).)
(Hore Serie No. 69(1).)
Geneva, January 16th, 1934.
LEAGUE OF NATIONS
NOTES BY THE ECONOMIC RELATIONS SECTION AND THE
CQhMNICATIONS AND TRANSIT SECTION ON THE
MERCHANT SHIPPING CRISIS.
March 16th, 1933.
Page
Chapter I. - General 1
" II. - Increase in the Tonnage afloat since the
World War 1
" III. - Decrease in Sea-borne Goods and
Passenger Traffic 6
” IV. - Fall in Freights 8
" Y. - Position of the Shipbuilding Industry;
the Laying-up and Scrapping of Part
of the Surplus Tonnage 11
” VI. - Various Forms of Government Intervention 14
” VII. - Action by Shipowners to improve the
Situation 20
" VIII. - Various Proposals for International
Action 23
" IX. - Movement of Opinion in Shipping Circles,
especially in the United Kingdom a . 26
Annex - Bibliography 29
No te.
The notes collected in the present document are intended
to afford a general, though brief and objective survey of the various
problems raised by the question of merchant marine. They have been
compiled on the basis of material taken from a number of non-official
and even private publications. The Secretariat has confined itself
to collecting and co-ordinating the information thus obtained. It
can therefore take no responsibility for its accuracy.
Series of League of Nations Publications
VIII. TRANSIT
1934. VIII. 3.