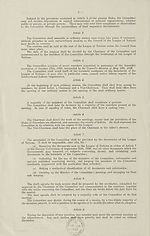 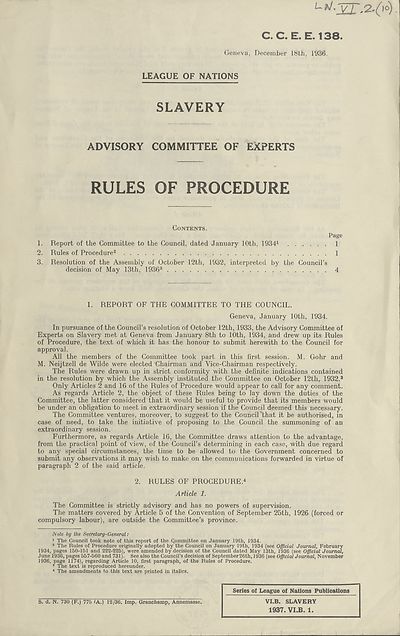 L ^'Xl x(>0).
C. C. E. E. 138.
Geneva, December 18th, 1936.
LEAGUE OF NATIONS
SLAVERY
ADVISORY COMMITTEE OF EXPERTS
RULES OF PROCEDURE
Contents.
Page
1. Report of the Committee to the Council, dated January 10th, 19341 1
2. Rules of Procedure2 1
3. Resolution of the Assembly of October 12th, 1932, interpreted by the Council’s
decision of May 13th, 19363 4
1. REPORT OF THE COMMITTEE TO THE COUNCIL.
Geneva, January 10th, 1934.
In pursuance of the Council’s resolution of October 12th, 1933, the Advisory Committee of
Experts on Slavery met at Geneva from January 8th to 10th, 1934, and drew up its Rules
of Procedure, the text of which it has the honour to submit herewith to the Council for
approval.
All the members of the Committee took part in this first session. M. Gohr and
M. Neijtzell de Wilde were elected Chairman and Vice-Chairman respectively.
The Rules were drawn up in strict conformity with the definite indications contained
in the resolution by which the Assembly instituted the Committee on October 12th, 1932.3
Only Articles 2 and 16 of the Rules of Procedure would appear to call for any comment.
As regards Article 2, the object of these Rules being to lay down the duties of the
Committee, the latter considered that it would be useful to provide that its members would
be under an obligation to meet in extraordinary session if the Council deemed this necessary.
The Committee ventures, moreover, to suggest to the Council that it be authorised, in
case of need, to take the initiative of proposing to the Council the summoning of an
extraordinary session.
Furthermore, as regards Article 16, the Committee draws attention to the advantage,
from the practical point of view, of the Council’s determining in each case, with due regard
to any special circumstances, the time to be allowed to the Government concerned to
submit any observations it may wish to make on the communications forwarded in virtue of
paragraph 2 of the said article.
2. RULES OF PROCEDURE.4
Article 1.
The Committee is strictly advisory and has no powers of supervision.
The matters covered by Article 5 of the Convention of September 25th, 1926 (forced or
compulsory labour), are outside the Committee’s province.
Nole by the Secretary-General:
1 The Council took note of this report of the Committee on January 19th, 1934.
2 The Rules of Procedure originally adopted by the Council on January 19th, 1934 (see Official Journal, February
1934, pages 150-151 and 222-225), were amended by decision of the Council dated May 13th, 1936 (see Official Journal,
June 1936, pages 557-560 and 731). See also the Council’s decision of September26th, 1936 (see Official Journal, November
1936, page 1174), regarding Article 10, first paragraph, of the Rules of Procedure.
3 The text is reproduced hereunder.
4 The amendments to this text are printed in italics.
Series of League of Nations Publications
VLB. SLAVERY
1937. VLB. 1.
S. d. N. 730 (F.) 775 1A.) 12/36. Imp. Granchamp, Annemasse.