Economic and financial section > Commission of enquiry for European Union 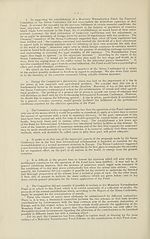 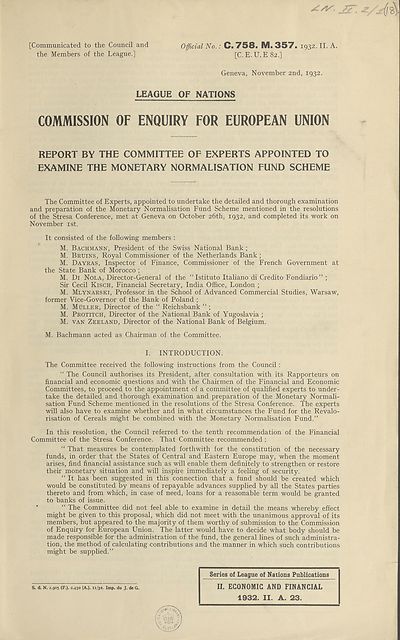 JF, */*($&>.
[Communicated to the Council and
the Members of the League.]
Official No.: C. 758- M. 357. 1932. II. A.
[C.E.U.E82.]
Geneva, November 2nd, 1932.
LEAGUE OF NATIONS
COMMISSION OF ENQUIRY FOR EUROPEAN UNION
REPORT BY THE COMMITTEE OF EXPERTS APPOINTED TO
EXAMINE THE MONETARY NORMALISATION FUND SCHEME
The Committee of Experts, appointed to undertake the detailed and thorough examination
and preparation of the Monetary Normalisation Fund Scheme mentioned in the resolutions
of the Stresa Conference, met at Geneva on October 26th, 1932, and completed its work on
November 1st.
It consisted of the following members :
M. Bachmann, President of the Swiss National Bank ;
M. Bruins, Royal Commissioner of the Netherlands Bank ;
M. Dayras, Inspector of Finance, Commissioner of the French Government at
the State Bank of Morocco ;
M. Di Nola, Director-General of the “ Istituto Italiano di Credito Fondiario” ;
Sir Cecil Risen, Financial Secretary, India Office, London ;
M. Mlynarski, Professor in the School of Advanced Commercial Studies, Warsaw,
former Vice-Governor of the Bank of Poland ;
M. Muller, Director of the “ Reichsbank ” ;
M. Protitch, Director of the National Bank of Yugoslavia ;
M. van Zeeland, Director of the National Bank of Belgium.
M. Bachmann acted as Chairman of the Committee.
I. INTRODUCTION.
The Committee received the following instructions from the Council :
“ The Council authorises its President, after consultation with its Rapporteurs on
financial and economic questions and with the Chairmen of the Financial and Economic
Committees, to proceed to the appointment of a committee of qualified experts to under¬
take the detailed and thorough examination and preparation of the Monetary Normali¬
sation Fund Scheme mentioned in the resolutions of the Stresa Conference. The experts
will also have to examine whether and in what circumstances the Fund for the Revalo¬
risation of Cereals might be combined with the Monetary Normalisation Fund.”
In this resolution, the Council referred to the tenth recommendation of the Financial
Committee of the Stresa Conference. That Committee recommended :
“ That measures be contemplated forthwith for the constitution of the necessary
funds, in order that the States of Central and Eastern Europe may, when the moment
arises, find financial assistance such as will enable them definitely to strengthen or restore
their monetary situation and will inspire immediately a feeling of security.
“ It has been suggested in this connection that a fund should be created which
would be constituted by means of repayable advances supplied by all the States parties
thereto and from which, in case of need, loans for a reasonable term would be granted
to banks of issue.
“ The Committee did not feel able to examine in detail the means whereby effect
might be given to this proposal, which did not meet with the unanimous approval of its
members, but appeared to the majority of them worthy of submission to the Commission
of Enquiry for European Union. The latter would have to decide what body should be
made responsible for the administration of the fund, the general lines of such administra¬
tion, the method of calculating contributions and the manner in which such contributions
might be supplied.”
Series of League of Nations Publications
II. ECONOMIC AND FINANCIAL
1932. II. A. 23.
S. d. N. 2.905 (F.). 2.430 (A.). 11/32. Imp. du J. de G.