Legal > Organisation of the Permanent Court of International Justice 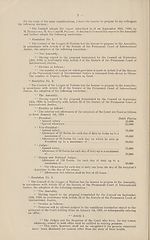 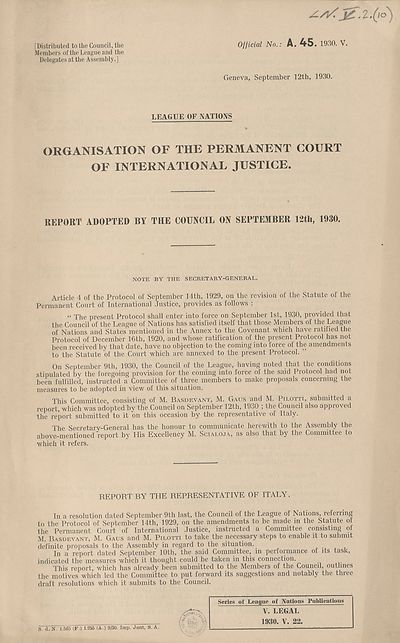 [Distributed to the Council, the
Members of the League and the
Delegates at the Assembly.]
j^ZL. 2. (10s)
Official No.: A. A5. 1930. V.
Geneva, September 12th, 1930.
LEAGUE OF NATIONS
ORGANISATION OF THE PERMANENT COURT
OF INTERNATIONAL JUSTICE.
REPORT ADOPTED RT THE COUNCIL ON SEPTEMRER 12tli, 1930.
NOTE BY THE SECRETARY-GENERAL.
Article 4 of the Protocol of September 14th, 1929, on the revision of the Statute of the
Permanent Court of International Justice, provides as follows :
“ The present Protocol shall enter into force on September 1st, 1930, provided that
the Council of the League of Nations has satisfied itself that those Members of the League
of Nations and States mentioned in the Annex to the Covenant which have ratified the
Protocol of December 16th, 1920, and whose ratification of the present Protocol has not
been received by that date, have no objection to the coming into force of the amendments
to the Statute of the Court which are annexed to the present Protocol.
On September 9th, 1930, the Council of the League, having noted that the conditions
stipulated by the foregoing provision for the coming into force of the said Protocol had not
been fulfilled, instructed a Committee of three members to make proposals concerning the
measures to be adopted in view of this situation.
This Committee, consisting of M. Basdevant, M. Gaits and M. Pilotti, submitted a
report, which was adopted by the Council on September 12th, 1930 ; the Council also approved
the report submitted to it on this occasion by the representative of Italy.
The Secretary-General has the honour to communicate herewith to the Assembly the
above-mentioned report by His Excellency M. Scialoja, as also that by the Committee to
which it refers.
REPORT BY THE REPRESENTATIVE OF ITALY.
In a resolution dated September 9th last, the Council of the League of Nations, referring
to the Protocol of September 14th, 1929, on the amendments to be made in the Statute ot
the Permanent Court of International Justice, instructed a Committee consisting o
M. Basdevant, M. Gaus and M. Pilotti to take the necessary steps to enable it to submit
definite proposals to the Assembly in regard to the situation.
In a report dated September 10th, the said Committee, in performance of its task,
indicated the measures which it thought could be taken in this connection.
This report, which has already been submitted to the Members of the Council, outlines
the motives which led the Committee to put forward its suggestions and notably the three
draft resolutions which it submits to the Council.
Series of League of Nations Publications
~v7 LEGAL
1930. V. 22.
s. T N. L565 (F.) 1.235 (A.) 9/30. Imp. Jent, S. A.