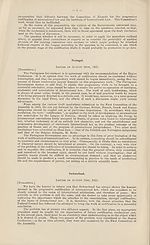 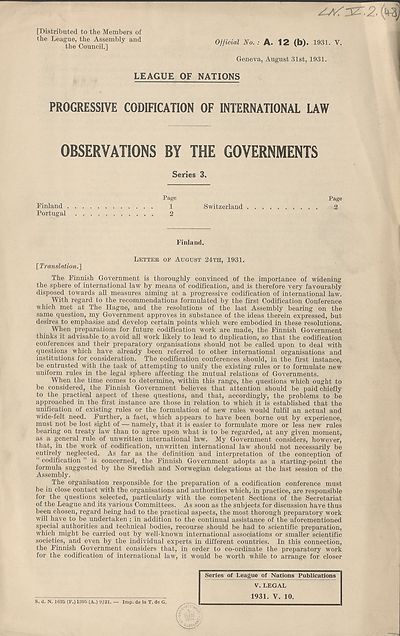 [Distributed to the Members of
the League, the Assembly and 0fficial No. . A> |2 (b) 1931 v_
Geneva, August 31st, 1931.
LEAGUE OF NATIONS
PROGRESSIVE CODIFICATION OF INTERNATIONAL LAW
OBSERVATIONS BY THE GOVERNMENTS
Series 3,
Page Page
1 Switzerland 2
2
Finland.
Letter of August 24th, 1931.
[TransloMon.']
The Finnish Government is thoroughly convinced of the importance of widening
the sphere of international law by means of codification, and is therefore very favourably
disposed towards all measures aiming at a progressive codification of international law.
With regard to the recommendations formulated by the first Codification Conference
which met at The Hague, and the resolutions of the last Assembly bearing on the
same question, my Government approves in substance of the ideas therein expressed, but
desires to emphasise and develop certain points which were embodied in these resolutions.
When preparations for future codification work are made, the Finnish Government
thinks it advisable to avoid all work likely to lead to duplication, so that the codification
conferences and their preparatory organisations should not be called upon to deal with
questions which have already been referred to other international organisations and
institutions for consideration. The codification conferences should, in the first instance,
be entrusted with the task of attempting to unify the existing rules or to formulate new
uniform rules in the legal sphere affecting the mutual relations of Governments.
When the time comes to determine, within this range, the questions which ought to
be considered, the Finnish Government believes that attention should be paid chiefly
to the practical aspect of these questions, and that, accordingly, the problems to be
approached in the first instance are those in relation to which it is established that the
unification of existing rules or the formulation of new rules would fulfil an actual and
wide-felt need. Further, a fact, which appears to have been borne out by experience,
must not be lost sight of — namely, that it is easier to formulate more or less new rules
bearing on treaty law than to agree upon what is to be regarded, at any given moment,
as a general rule of unwritten international law. My Government considers, however,
that, in the work of codification, unwritten international law should not necessarily be
entirely neglected. As far as the definition and interpretation of the conception of
“ codification ” is concerned, the Finnish Government adopts as a starting-point the
formula suggested by the Swedish and Norwegian delegations at the last session of the
Assembly.
The organisation responsible for the preparation of a codification conference must
be in close contact with the organisations and authorities which, in practice, are responsible
for the questions selected, particularly with the competent Sections of the Secretariat
of the League and its various Committees. As soon as the subjects for discussion have thus
been chosen, regard being had to the practical aspects, the most thorough preparatory work
will have to be undertaken : in addition to the continual assistance of the aforementioned
special authorities and technical bodies, recourse should be had to scientific preparation,
which might be carried out by well-knowm international associations or smaller scientific
societies, and even by the individual experts in different countries. In this connection,
the Finnish Government considers that, in order to co-ordinate the preparatory work
for the codification of international law, it would be worth while to arrange for closer
Finland
Portugal
Series of League of Nations Publications
V. LEGAL
1931. V. 10.
S. d. N. 1625 (F.) 1395 (A.) 9/31. — Imp. de la T. de G.