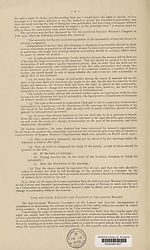 [Communicated to the Assembly, Official No.: j|a IH (is). 1935- V.
the Council and the Members of
the League.]
Geneva, September 6th, 1935.
LEAGUE OF NATIONS
NATIONALITY AND STATUS OF WOMEN
STATEMENTS PRESENTED BY INTERNATIONAL
WOMEN’S ORGANISATIONS
(Supplement)
INTERNATIONAL WOMEN’S COMMITTEE OF THE LABOUR
AND SOCIALIST INTERNATIONAL. 1
EQUALITY OF RIGHTS FOR WOMEN.
The rights of women in the spheres of nationality and of civil legislation, and in the labour
market, are losing ground in certain countries and in others are subject to attacks of some
severity. There is reason, therefore, to welcome the initiative taken by the Consultative
Committee of Women’s Organisations with a view to having women’s questions placed on
the agenda of the League of Nations.
In all the chief women’s organisations, the problem of women’s rights has been and still
is the object of sustained investigation. The International Women’s Committee of the Labour
and Socialist International, representing the ensemble of the women’s movements of the
countries affiliated to the Labour and Socialist International, has not failed to give attention
to it, and ever since the Hague Convention (1930) has defined its position on the question of
the
Nationality of Married Women.
It is hardly necessary to dwell upon all the sometimes tragic difficulties which the different
state of the law, varying, one might almost say, from one country to another, entails for women
and often for their children, nor is there much need to point out the necessity of international
agreement.
It is right, therefore, to acknowledge the efforts of the countries which are signatories
of the Treaty of Montevideo. It is to be feared, however, that ratification of this Treaty by
all States would be in reality a step detrimental to the position of women in certain countries
and would prejudice those women whose emancipation is being sought. It appears to the
International Women’s Committee of the Labour and Socialist International that the text
proposed in it (“ There shall be no distinction based on sex as regards nationality, in their
legislation or in their practice ”) undoubtedly constitutes an excellent slogan, but that it
would mean a definite disadvantage for the women citizens of countries such as Belgium,
France, Luxemburg and Yugoslavia, which grant the right to choose nationality to women
marrying one of their nationals, or such as the United States of America, Belgium, France,
Luxemburg, Estonia and Roumania, which give the right to women marrying a foreigner.
The International Women’s Committee of the Labour and Socialist International has
admitted the Hague Convention as a basis, viewing it as an advantage on some existing national
laws, in the hope that it would be improved and would lead to a right of choice being introduced
in all countries. Accordingly, at its meeting in January 1931, it passed a resolution affirming
1 The letter transmitting this document to the Secretary-General states :
[Translation.']
“ This memorandum was unanimously adopted by the International Women’s Committee of
the Labour and Socialist International at a meeting held on August 31st and September 1st, 1935,
at Brussels, under the Chairmanship of Mrs. J. L. Adamson, delegate of the Women’s Organisations
of the British Labour Party.
“ It therefore constitutes the expression of the unanimous wishes of the working women organised
in the Socialist parties which are affiliated to the Labour and Socialist International.”
Series of League of Nations Publications
V. LEGAL
1935. V. 7.
S.d.N. 1.255 (F-) i-2°o (A.). 9/35. Imp. du J. ds G.