History of the Frasers of Lovat 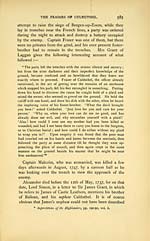 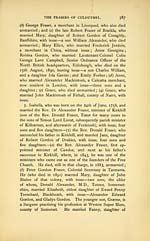 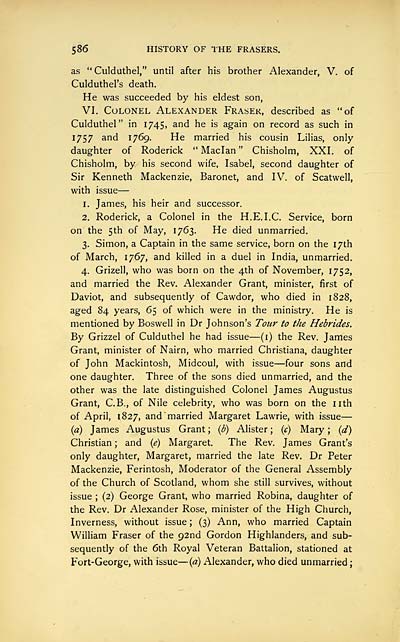 586 HISTORY OF THE FRASERS.
as "Culduthel," until after his brother Alexander, V. of
Culduthel's death.
He was succeeded by his eldest son,
VI. Colonel Alexander Fraser, described as "of
Culduthel" in 1745, and he is again on record as such in
1757 and 1769. He married his cousin Lilias, only
daughter of Roderick " Maclan " Chisholm, XXI. of
Chisholm, by his second wife, Isabel, second daughter of
Sir Kenneth Mackenzie, Baronet, and IV. of Scatwell,
with issue —
1. James, his heir and successor.
2. Roderick, a Colonel in the H.E.I.C. Service, born
on the 5th of May, 1763. He died unmarried.
3. Simon, a Captain in the same service, born on the 17th
of March, 1767, and killed in a duel in India, unmarried.
4. Grizell, who was born on the 4th of November, 1752,
and married the Rev. Alexander Grant, minister, first of
Daviot, and subsequently of Cawdor, who died in 1828,
aged 84 years, 65 of which were in the ministry. He is
mentioned by Boswell in Dr Johnson's Tour to the Hebrides.
By Grizzel of Culduthel he had issue — (1) the Rev. James
Grant, minister of Nairn, who married Christiana, daughter
of John Mackintosh, Midcoul, with issue — four sons and
one daughter. Three of the sons died unmarried, and the
other was the late distinguished Colonel James Augustus
Grant, C.B., of Nile celebrity, who was born on the nth
of April, 1827, and 'married Margaret Lawrie, with issue —
(a) James Augustus Grant ; (b) Alister ; (c) Mary ; (d)
Christian ; and (e) Margaret. The Rev. James Grant's
only daughter, Margaret, married the late Rev. Dr Peter
Mackenzie, Ferintosh, Moderator of the General Assembly
of the Church of Scotland, whom she still survives, without
issue ; (2) George Grant, who married Robina, daughter of
the Rev. Dr Alexander Rose, minister of the High Church,
Inverness, without issue ; (3) Ann, who married Captain
William Fraser of the 92nd Gordon Highlanders, and sub-
sequently of the 6th Royal Veteran Battalion, stationed at
Fort-George, with issue — (a) Alexander, who died unmarried ;