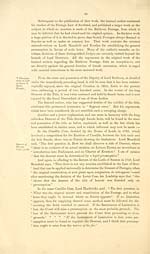 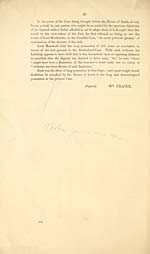 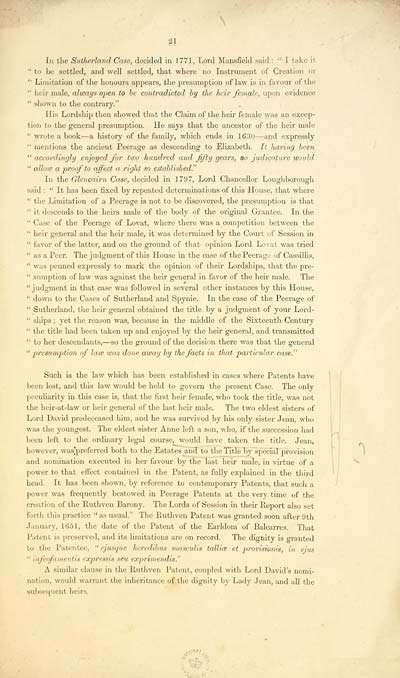 21
In the Sutherland Case, decided in 1771, Lord Mansfield said : " I take it
" to be settled, and well settled, that where no Instrument of Creation or
" Limitation of the honours appears, the presumption of law is in favour of the
" heir male, aliuays open to he contradicted by the heir female, upon evidence
" shown to the contrary."
His Lordship then showed that the Claim of the heir female was an excep-
tion to the general presumption. He says that the ancestor of the heir male
" wrote a book — a history of the family, which ends in 1630 — and expressly
" mentions the ancient Peerage as descending to Elizabeth. It having been
"accordingly enjoyed for two hundred and fifty years, no judicature would
" allow a proof to affect a right so established."
In the Glencairn Case, decided in 1797, Lord Chancellor Loughborough
said : " It has been fixed by repeated determinations of this House, that where
" the Limitation of a Peerage is not to be discovered, the presumption is that
" it descends to the heirs male of the body of the original Grantee. In the
" Case of the Peerage of Lovat, where there was a competition between the
" heir general and the heir male, it was determined by the Court of Session in
" favor of the latter, and on the ground of that opinion Lord Lovat was tried
" as a Peer. The judgment of this House in the case of the Peerage of Cassillis,
" was penned expressly to mark the opinion of their Lordships, that the pre-
" sumption of law was against the heir general in favor of the heir male. The
"judgment in that case was followed in several other instances by this House,
" down to the Cases of Sutherland and Spynie. In the case of the Peerage of
" Sutherland, the heir general obtained the title by a judgment of your Lord-
" ships ; yet the reason was, because in the middle of the Sixteenth Century
" the title had been taken up and enjoyed by the heir general, and transmitted
" to her descendants, — so the ground of the decision there was that the general
"presumption of law was done away by the facts in that particular case."
Such is the law which has been established in cases where Patents have
been lost, and this law would be held to govern the present Case. The only
peculiarity in this case is, that the first heir female, who took the title, was not
the heir-at-law or heir general of the last heir male. The two eldest sisters of
Lord David predeceased him, and he was survived by his only sister Jean, who
was the youngest. The eldest sister Anne left a son, who, if the succession had
been left to the ordinary legal course, would have taken the title. Jean,
however, was'preferred both to the Estates and to the Title by special provision
and nomination executed in her favour by the last heir male, in virtue of a
power to that effect contained in the Patent, as fully explained in the third
head. It has been shown, by reference to contemporary Patents, that such a
power was frequently bestowed in Peerage Patents at the very time of the
creation of the Ruthven Barony. The Lords of Session in their Report also set
forth this practice "as usual." The Ruthven Patent was granted soon after 9th
January, 1651, the date of the Patent of the Earldom of Balcarres. That
Patent is preserved, and its limitations are on record. The dignity is granted
to the Patentee, " ejusque heredibus masculis tallice et provisionis, in ejus
" infeofamentis expressis seu exprimendis."
A similar clause in the Ruthven Patent, coupled with Lord David's nomi-
nation, would warrant the inheritance of the dignity by Lady Jean, and all the
subsequent heirs.
<v