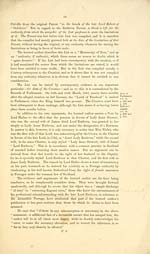 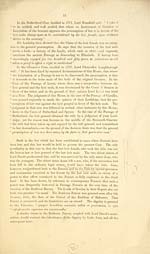 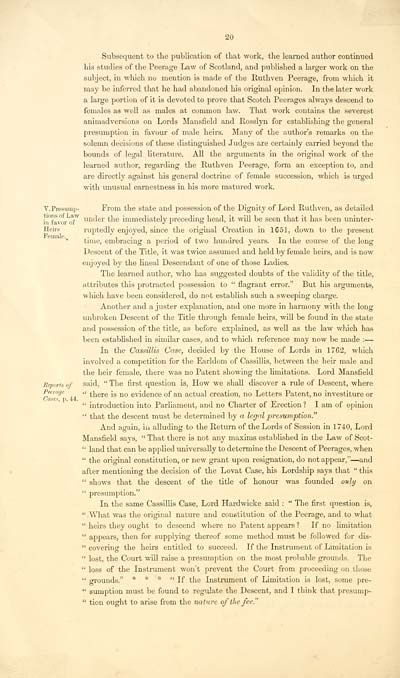 20
Subsequent to the publication of that work, the learned author continued
his studies of the Peerage Law of Scotland, and published a larger work on the
subject, in which no mention is made of the Ruthven Peerage, from which it
may be inferred that he had abandoned his original opinion. In the later work
a large portion of it is devoted to prove that Scotch Peerages always descend to
females as well as males at common law. That work contains the severest
animadversions on Lords Mansfield and Rosslyn for establishing the general
presumption in favour of male heirs. Many of the author's remarks on the
solemn decisions of these distinguished Judges are certainly carried beyond the
bounds of legal literature. All the arguments in the original work of the
learned author, regarding the Ruthven Peerage, form an exception to, and
are directly against his general doctrine of female succession, which is urged
with unusual earnestness in his more matured work.
V.Presump- From the state and possession of the Dignity of Lord Ruthven, as detailed
in°favor of W unc ^ er ^ ne immediately preceding head, it will be seen that it has been uninter-
Ileirs ruptedly enjoyed, since the original Creation in 1651, down to the present
time, embracing a period of two hundred years. In the course of the long
Descent of the Title, it was twice assumed and held by female heirs, and is now
enjoyed by the lineal Descendant of one of those Ladies.
The learned author, who has suggested doubts of the validity of the title,
attributes this protracted possession to " flagrant error." But his arguments,
which have been considered, do not establish such a sweeping charge.
Another and a juster explanation, and one more in harmony with the long
unbroken Descent of the Title through female heirs, will be found in the state
and possession of the title, as before explained, as well as the law which has
been established in similar cases, and to which reference may now be made : —
In the Cassillis Case, decided by the House of Lords in 1762, which
involved a competition for the Earldom of Cassillis, between the heir male and
the heir female, there was no Patent showing the limitations. Lord Mansfield
Reports of said, " The first question is, How we shall discover a rule of Descent, where
Peerage <c th ere } g no evidence of an actual creation, no Letters Patent, no investiture or
Cases, p. 44. .
" introduction into Parliament, and no Charter of Erection? I am of opinion
" that the descent must be determined by a legal presumption."
And again, in alluding to the Return of the Lords of Session in 1740, Lord
Mansfield says, " That there is not any maxims established in the Law of Scot-
" land that can be applied universally to determine the Descent of Peerages, when
" the original constitution, or new grant upon resignation, do not appear," — and
after mentioning the decision of the Lovat Case, his Lordship says that " this
" shows that the descent of the title of honour was founded only on
" presumption."
In the same Cassillis Case, Lord Hardwicke said : " The first question is,
" What was the original nature and constitution of the Peerage, and to what
" heirs they ought to descend where no Patent appears ? If no limitation
" appears, then for supplying thereof some method must be followed for dis-
" covering the heirs entitled to succeed. If the Instrument of Limitation is
" lost, the Court will raise a presumption on the most probable grounds. The
" loss of the Instrument won't prevent the Court from proceeding on those
" grounds." * * * " If the Instrument of Limitation is lost, some pre-
" sumption must be found to regulate the Descent, and I think that presump-
" tion ought to arise from the nature of the fee."