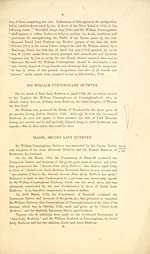 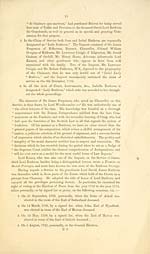 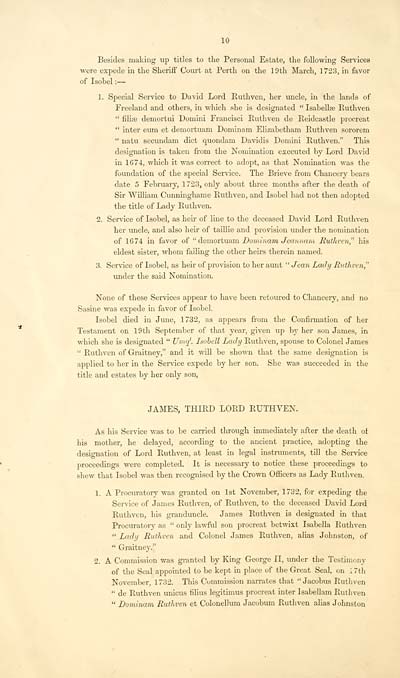 10
Besides making up titles to the Personal Estate, the following Services
were expede in the Sheriff Court at Perth on the 19th March, 1723, in favor
of Isobel : —
1. Special Service to David Lord Ruthven, her uncle, in the lands of
Freeland and others, in which she is designated " Isabellas Ruthven
" filise demortui Domini Francisci Ruthven de Reidcastle procreat
" inter eum et demortuam Dominam Elizabetham Ptuthven sororem
" natu secundam diet quondam Davidis Domini Ruthven." This
designation is taken from the Nomination executed by Lord David
in 1674, which it was correct to adopt, as that Nomination was the
foundation of the special Service. The Brieve from Chancery bears
date 5 February, 1 723, only about three months after the death of
Sir William Cunninghame Ruthven, and Isobel had not then adopted
the title of Lady Ruthven.
2. Service of Isobel, as heir of line to the deceased David Lord Ruthven
her uncle, and also heir of taillie and provision under the nomination
of 1674 in favor of " demortuam Dominam Jeannam Ruthven," his
eldest sister, whom failing the other heirs therein named.
3. Service of Isobel, as heir of provision to her aunt " Jean Lady Ruthven,"
under the said Nomination.
None of these Services appear to have been retoured to Chancery, and no
Sasine was expede in favor of Isobel.
Isobel died in June, 1732, as appears from the Confirmation of her
Testament on 19th September of that year, given up by her son James, in
which she is designated " Umq 1 . Isobell Lady Ruthven, spouse to Colonel James
" Ruthven of Graitney," and it will be shown that the same designation is
applied to her in the Service expede by her son. She was succeeded in the
title and estates by her only son,
JAMES, THIRD LORD RUTHVEN.
As his Service was to be carried through immediately after the death of
his mother, he delayed, according to the ancient practice, adopting the
designation of Lord Ruthven, at least in legal instruments, till the Service
proceedings were completed. It is necessary to notice these proceedings to
shew that Isobel was then recognised by the Crown Officers as Lady Ruthven.
1. A Procuratory was granted on 1st November, 1732, for expeding the
Service of James Ruthven, of Ruthven, to the deceased David Lord
Ruthven, his granduncle. James Ruthven is designated in that
Procuratory as " only lawful son procreat betwixt Isabella Ruthven
" Lady Ruthven and Colonel James Ruthven, alias Johnston, of
" Graitney."
2. A Commission was granted by King George II, under the Testimony
of the Seal appointed to be kept in place of the Great Seal, on 1 7th
November, 1 732. This Commission narrates that " Jacobus Ruthven
" de Ruthven unicus filius legitimus procreat inter Isabellam Ruthven
" Dominam Ruthven et Colonellum Jacobum Ruthven alias Johnston