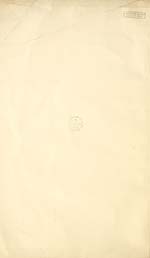 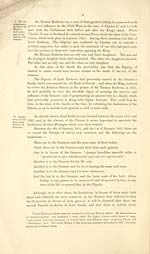 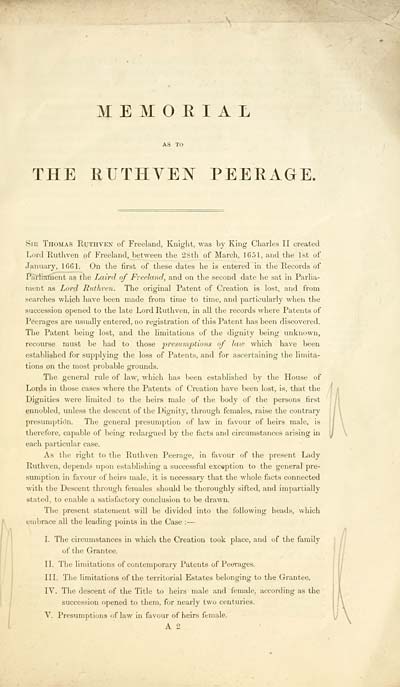 MEMOEIAL
AS TO
THE RUTHYEN PEERAGE.
Sir Thomas Ruthven of Freeland, Knight, was by King Charles II created
Lord Ruthven of Freeland, between the 28th of March, 1651, and the 1st of
January, 1661. On the first of these dates he is entered in the Records of
Parliament as the Laird of Freeland, and on the second date he sat in Parlia-
ment as Lord Ruthven. The original Patent of Creation is lost, and from
searches which have been made from time to time, and particularly when the
succession opened to the late Lord Ruthven, in all the records where Patents of
Peerages are usually entered, no registration of this Patent has been discovered.
The Patent being lost, and the limitations of the dignity being unknown,
recourse must be had to those presumptions of law which have been
established for supplying the loss of Patents, and for ascertaining the limita-
tions on the most pi'obable grounds.
The general rule of law, which has been established by the House of
Lords in those cases where the Patents of Creation have been lost, is, that the
Dignities were limited to the heirs male of the body of the persons first
ennobled, unless the descent of the Dignity, through females, raise the contrary
presumption. The general presumption of law in favour of heirs male, is
therefore, capable of being redargued by the facts and circumstances arising in
each particular case.
As the right to the Ruthven Peerage, in favour of the present Lady
Paithven, depends upon establishing a successful exception to the general pre-
sumption in favour of heirs male, it is necessary that the whole facts connected
with the Descent through females should be thoroughly sifted, and impai'tially
stated, to enable a satisfactory conclusion to be drawn.
The present statement will be divided into the following heads, which
embrace all the leading points in the Case :—
I. The circumstances in which the Creation took place, and of the family
of the Grantee.
II. The limitations of contemporary Patents of Peerages.
III. The limitations of the territorial Estates belonging to the Grantee.
IV. The descent of the Title to heirs male and female, according as the
succession opened to them, for nearly two centuries.
V. Presumptions of law in favour of heirs female.
A 2