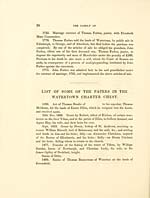 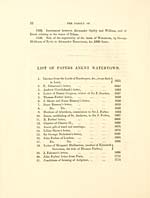 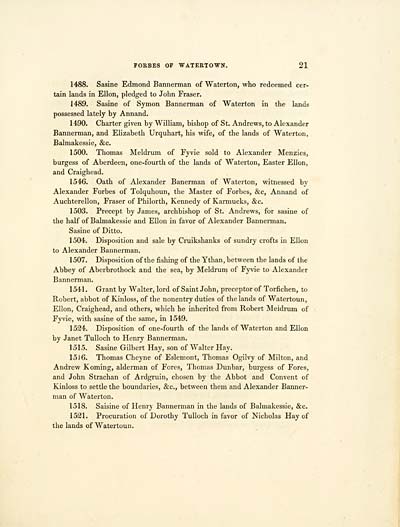 FORBES OF WATERTOWN. 21
1488. Sasine Edmond Bannerman of Waterton, who redeemed cer-
tain lands in Ellon, pledged to John Fraser.
1489. Sasine of Symon Bannerman of Waterton in the lands
possessed lately hy Annand.
1490. Charter given by William, bishop of St. Andrews, to Alexander
Bannerman, and Elizabeth Urquhart, his wife, of the lands of Waterton,
Balmakessie, &c.
1500. Thomas Meldrum of Fyvie sold to Alexander Menzies,
burgess of Aberdeen, one-fourth of the lands of Waterton, Easter Ellon,
and Craighead.
1546. Oath of Alexander Banerman of Waterton, witnessed by
Alexander Forbes of Tolquhoun, the Master of Forbes, &c, Annand of
Auchterellon, Fraser of Philorth, Kennedy of Karmucks, &c.
1503. Precept by James, archbishop of St. Andrews, for sasine of
the half of Balmakessie and Ellon in favor of Alexander Bannerman.
Sasine of Ditto.
1504. Disposition and sale by Cruikshanks of sundry crofts in Ellon
to Alexander Bannerman.
1507. Disposition of the fishing of the Ythan, between the lands of the
Abbey of Aberbrothock and the sea, by Meldrum of Fyvie to Alexander
Bannerman.
1541 . Grant by Walter, lord of Saint John, preceptor of Torfichen, to
Robert, abbot of Kinloss, of the nonentry duties of the lands of Watertoun,
Ellon, Craighead, and others, which he inherited from Robert Meidrum of
Fyvie, with sasine of the same, in 1549.
1524. Disposition of one-fourth of the lands of Waterton and Ellon
by Janet Tulloch to Henry Bannerman.
1515. Sasine Gilbert Hay, son of Walter Hay.
1516. Thomas Cheyne of Eslemont, Thomas Ogilvy of Milton, and
Andrew Koming, alderman of Fores, Thomas Dunbar, burgess of Fores,
and John Strachan of Ardgruin, chosen by the Abbot and Convent of
Kinloss to settle the boundaries, &c, between them and Alexander Banner-
man of Waterton.
1518. Saisine of Henry Bannerman in the lands of Balmakessie, &c.
1521. Procuration of Dorothy Tulloch in favor of Nicholas Hay of
the lands of Watertoun.