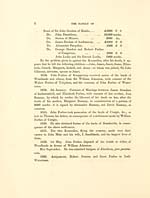 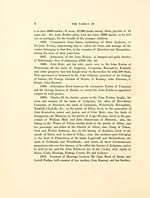 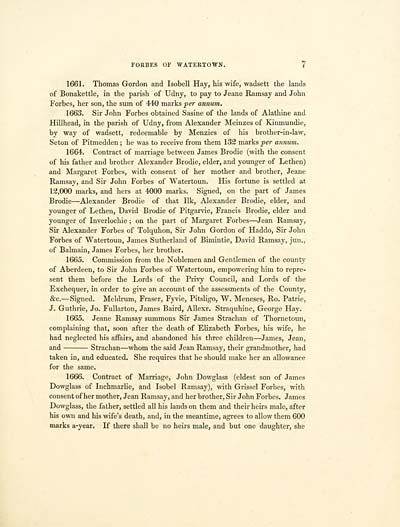 FORBES OF WATERTOWN. 7
1661. Thomas Gordon and Isobell Hay, his wife, wadsett the lands
of Bonakettle, in the parish of Udny, to pay to Jeane Ramsay and John
Forbes, her son, the sum of 440 marks per annum.
1663. Sir John Forbes obtained Sasine of the lands of Alathine and
Hillhead, in the parish of Udny, from Alexander Meinzes of Kinmundie,
by way of wadsett, redeemable by Menzies of his brother-in-law,
Seton of Pitmedden ; he was to receive from them 132 marks per annum.
1664. Contract of marriage between James Brodie (with the consent
of his father and brother Alexander Brodie, elder, and younger of Lethen)
and Margaret Forbes, with consent of her mother and brother, Jeane
Ramsay, and Sir John Forbes of Watertoun. His fortune is settled at
12,000 marks, and hers at 4000 marks. Signed, on the part of James
Brodie — Alexander Brodie of that Ilk, Alexander Brodie, elder, and
younger of Lethen, David Brodie of Pitgarvie, Francis Brodie, elder and
younger of Inverlochie ; on the part of Margaret Forbes — Jean Ramsay,
Sir Alexander Forbes of Tolquhon, Sir John Gordon of Haddo, Sir John
Forbes of Watertoun, James Sutherland of Bimintie, David Ramsay, jun.,
of Balmain, James Forbes, her brother.
1665. Commission from the Noblemen and Gentlemen of the county
of Aberdeen, to Sir John Forbes of Watertoun, empowering him to repre-
sent them before the Lords of the Privy Council, and Lords of the
Exchequer, in order to give an account of the assessments of the County,
&c. — Signed. Meldrum, Fraser, Fyvie, Pitsligo, W. Meneses, Ro. Patrie,
J. Guthrie, Jo. Fullarton, James Baird, Allexr. Straquhine, George Hay.
1665. Jeane Ramsay summons Sir James Strachan of Thornetoun,
complaining that, soon after the death of Elizabeth Forbes, his wife, he
had neglected his affairs, and abandoned his three children — James, Jean,
and Strachan — whom the said Jean Ramsay, their grandmother, had
taken in, and educated. She requires that he should make her an allowance
for the same.
1666. Contract of Marriage, John Dowglass (eldest son of James
Dowglass of Inchmarlie, and Isobel Ramsay), with Grissel Forbes, with
consent of her mother, Jean Ramsay, and her brother, Sir John Forbes. James
Dowglass, the father, settled all his lands on them and their heirs male, after
his own and his wife's death, and, in the meantime, agrees to allow them 600
marks a-year. If there shall be no heirs male, and but one daughter, she