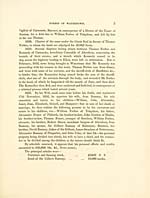 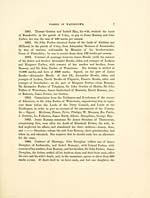 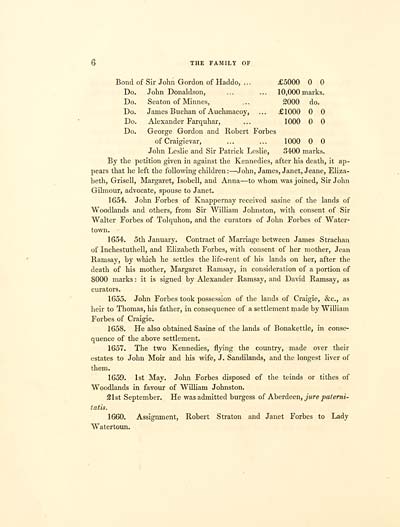 6 THE FAMILY OF
Bond of Sir John Gordon of Haddo, ... £5000
Do. John Donaldson, ... ... 10,000 marks.
Do. Seaton of Minnes, ... 2000 do.
Do. James Buchan of Auchmacoy, ... £1000
Do. Alexander Farquhar, ... 1000
Do. George Gordon and Robert Forbes
of Craigievar, ... ... 1000
John Leslie and Sir Patrick Leslie, 3400 marks.
By the petition given in against the Kennedies, after his death, it ap-
pears that he left the following children : — John, James, Janet, Jeane, Eliza-
beth, Grisell, Margaret, Isobell, and Anna — to whom was joined, Sir John
Gilmour, advocate, spouse to Janet.
1654. John Forbes of Knappernay received sasine of the lands of
Woodlands and others, from Sir William Johnston, with consent of Sir
Walter Forbes of Tolquhon, and the curators of John Forbes of Water-
town.
1654. 5th January. Contract of Marriage between James Strachan
of Inchestuthell, and Elizabeth Forbes, with consent of her mother, Jean
Ramsay, by which he settles the life-rent of his lands on her, after the
death of his mother, Margaret Ramsay, in consideration of a portion of
8000 marks : it is signed by Alexander Ramsay, and David Ramsay, as
curators.
1655. John Forbes took possession of the lands of Craigie, &c, as
heir to Thomas, his father, in consequence of a settlement made by William
Forbes of Craigie.
1658. He also obtained Sasine of the lands of Bonakettle, in conse-
quence of the above settlement.
1657. The two Kennedies, flying the country, made over their
estates to John Moir and his wife, J. Sandilands, and the longest liver of
them.
1659. 1st May. John Forbes disposed of the teinds or tithes of
Woodlands in favour of William Johnston.
21st September. He was admitted burgess of Aberdeen, jure paterni-
tatis.
1660. Assignment, Robert Straton and Janet Forbes to Lady
Watertoun.