Bairds of Auchmedden and Strichen, Aberdeenshire 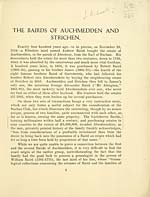 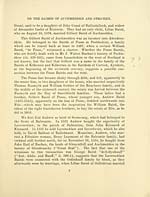 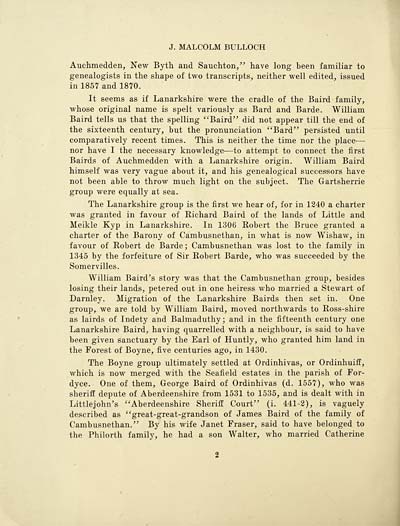 J. MALCOLM BULLOCH
Auchmedden, New Byth and Sauchton," have long been familiar to
genealogists in the shape of two transcripts, neither well edited, issued
in 1857 and 1870.
It seems as if Lanarkshire were the cradle of the Baird family,
whose original name is spelt variously as Bard and Barde. William
Baird tells us that the spelling "Baird" did not appear till the end of
the sixteenth century, but the pronunciation "Bard" persisted until
comparatively recent times. This is neither the time nor the place —
nor have I the necessary knowledge — to attempt to connect the first
Bairds of Auchmedden with a Lanarkshire origin. William Baird
himself was very vague about it, and his genealogical successors have
not been able to throw much light on the subject. The Gartsherrie
group were equally at sea.
The Lanarkshire group is the first we hear of, for in 1240 a charter
was granted in favour of Richard Baird of the lands of Little and
Meikle Kyp in Lanarkshire. In 1306 Robert the Bruce granted a
charter of the Barony of Cambusnethan, in what is now Wishaw, in
favour of Robert de Barde; Cambusnethan was lost to the family in
1345 by the forfeiture of Sir Robert Barde, who was succeeded by the
Somervilles.
William Baird's story was that the Cambusnethan group, besides
losing their lands, petered out in one heiress who married a Stewart of
Darnley. Migration of the Lanarkshire Bairds then set in. One
group, we are told by William Baird, moved northwards to Ross-shire
as lairds of Indety and Balmaduthy; and in the fifteenth century one
Lanarkshire Baird, having quarrelled with a neighbour, is said to have
been given sanctuary by the Earl of Huntly, who granted him land in
the Forest of Boyne, five centuries ago, in 1430.
The Boyne group ultimately settled at Ordinhivas, or Ordinhuiff,
which is now merged with the Seafield estates in the parish of For-
dyce. One of them, George Baird of Ordinhivas (d. 1557), who was
sheriff depute of Aberdeenshire from 1531 to 1535, and is dealt with in
Littlejohn's "Aberdeenshire Sheriff Court" (i. 441-2), is vaguely
described as "great-great-grandson of James Baird of the family of
Cambusnethan." By his wife Janet Fraser, said to have belonged to
the Philorth family, he had a son Walter, who married Catherine