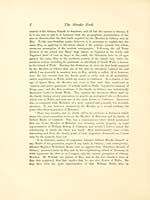 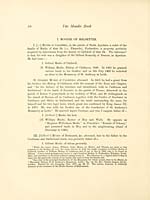 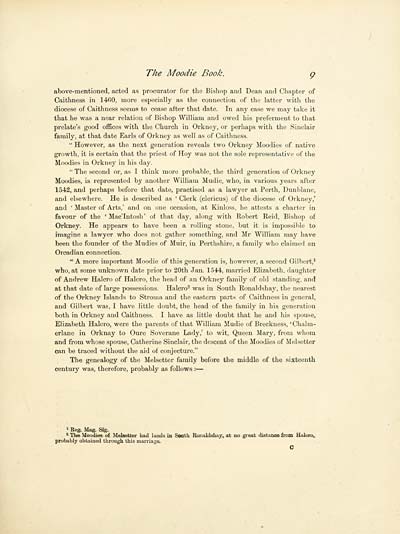 The Moodie Book. g
above-mentioned, acted as procurator for the Bishop and Dean and Chapter of
Caithness in 1460, more especially as the connection of the latter with the
diocese of Caithness seems to cease after that date. In any case we may take it
that he was a near relation of Bishop William and owed his preferment to that
prelate's good offices with the Church in Orkney, or perhaps with the Sinclair
family, at that date Earls of Orkney as well as of Caithness.
" However, as the next generation reveals two Orkney Moodies of native
growth, it is certain that the priest of Hoy was not the sole representative of the
Moodies in Orkney in his day.
" The second or, as I think more probable, the third generation of Orkney
Moodies, is represented by another William Mudie, who, in various years after
1542, and perhaps before that date, practised as a lawyer at Perth, Dunblane,
and elsewhere. He is described as ' Clerk (clericus) of the diocese of Orkney,'
and ' Master of Arts,' and on one occasion, at Kinloss, he attests a charter in
favour of the ' Mac'Intosh ' of that day, along with Robert Reid, Bishop of
Orkney. He appears to have been a rolling stone, but it is impossible to
imagine a lawyer who does not gather something, and Mr William may have
been the founder of the Mudies of Muir, in Perthshire, a family who claimed an
Orcadian connection.
" A more important Moodie of this generation is, however, a second Gilbert, 1
who, at some unknown date prior to 20th Jan. 1544, married Elizabeth, daughter
of Andrew Halcro of Halcro, the head of an Orkney family of old standing, and
at that date of large possessions. Halcro 2 was in South Ronaldshay, the nearest
of the Orkney Islands to Stroma and the eastern parts of Caithness in general,
and Gilbert was, I have little doubt, the head of the family in his generation
both in Orkney and Caithness. I have as little doubt that he and his spouse,
Elizabeth Halcro, were the parents of that William Mudie of Breckness, 'Chalm-
erlane in Orknay to Oure Soverane Lady,' to wit, Queen Mary, from whom
and from whose spouse, Catherine Sinclair, the descent of the Moodies of Melsetter
can be traced without the aid of conjecture."
The genealogy of the MeLsetter family before the middle of the sixteenth
century was, therefore, probably as follows : —
1 Reg. Mag. Sig.
2 The Moodies. of Melsetter had lands in South Konaldshay, at no great distance from Halero,
probably obtained through this marriage,
C