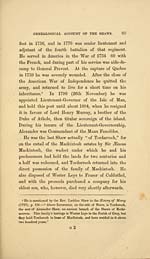 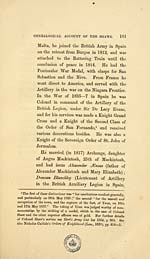 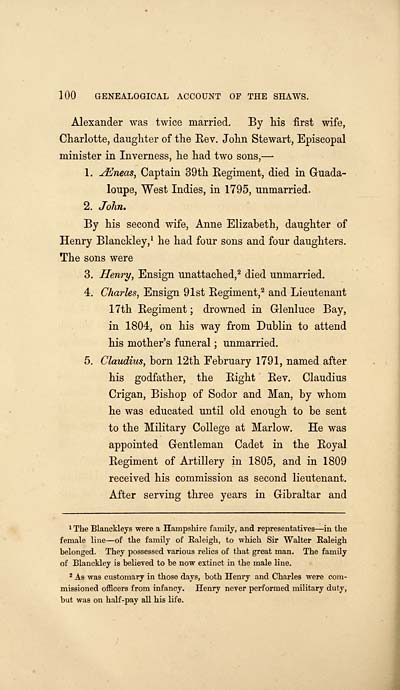 100 GENEALOGICAL ACCOUNT OF THE SHAWS.
Alexander was twice married. By his first wife,
Charlotte, daughter of the Rev. John Stewart, Episcopal
minister in Inverness, he had two sons, —
1. jEneas, Captain 39th Regiment, died in Guada-
loupe, "West Indies, in 1795, unmarried.
2. John.
By his second wife, Anne Elizabeth, daughter of
Henry Blanckley, 1 he had four sons and four daughters.
The sons were
3. Henry, Ensign unattached, 2 died unmarried.
4. Charles, Ensign 91st Regiment, 2 and Lieutenant
17th Regiment ; drowned in Glenluce Bay,
in 1804, on his way from Dublin to attend
his mother's funeral ; unmarried.
5. Claudius, born 12th February 1791, named after
his godfather, the Right Rev. Claudius
Crigan, Bishop of Sodor and Man, by whom
he was educated until old enough to be sent
to the Military College at Marlow. He was
appointed Gentleman Cadet in the Royal
Regiment of Artillery in 1805, and in 1809
received his commission as second lieutenant.
After serving three years in Gibraltar and
1 The Blanckleys were a Hampshire family, and representatives — in the
female line — of the family of Raleigh, to which Sir Walter Raleigh
belonged. They possessed various relics of that great man. The family
of Blanckley is believed to be now extinct in the male line.
2 As was customary in those days, both Henry and Charles were com-
missioned officers from infancy. Henry never performed military duty,
but was on half-pay all his life.