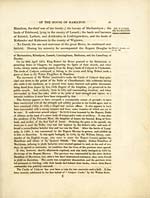 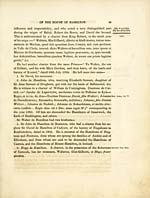 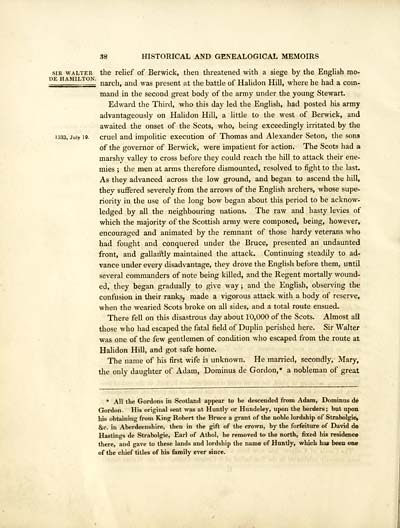 38 HISTORICAL AND GENEALOGICAL MEMOIRS
sir Walter the relief of Berwick, then threatened with a siege by the English mo-
DE HAMILTON.
narch, and was present at the battle of Halidon Hill, where he had a com-
mand in the second great body of the army under the young Stewart.
Edward the Third, who this day led the English, had posted his army
advantageously on Halidon Hill, a little to the west of Berwick, and
awaited the onset of the Scots, who, being exceedingly irritated by the
1333, July 19. cruel and impolitic execution of Thomas and Alexander Seton, the sons
of the governor of Berwick, were impatient for action. The Scots had a
marshy valley to cross before they could reach the hill to attack their ene-
mies ; the men at arms therefore dismounted, resolved to fight to the last.
As they advanced across the low ground, and began to ascend the hill,
they suffered severely from the arrows of the English archers, whose supe-
riority in the use of the long bow began about this period to be acknow-
ledged by all the neighbouring nations. The raw and hasty levies of
which the majority of the Scottish army were composed, being, however,
encouraged and animated by the remnant of those hardy veterans who
had fought and conquered under the Bruce, presented an undaunted
front, and gallantly maintained the attack. Continuing steadily to ad-
vance under every disadvantage, they drove the English before them, until
several commanders of note being killed, and the Regent mortally wound-
ed, they began gradually to give way; and the English, observing the
confusion in their ranks, made a vigorous attack with a body of reserve,
when the wearied Scots broke on all sides, and a total route ensued.
There fell on this disastrous day about 10,000 of the Scots. Almost all
those who had escaped the fatal field of Duplin perished here. Sir Walter
was one of the few gentlemen of condition who escaped from the route at
Halidon Hill, and got safe home.
The name of his first wife is unknown. He married, secondly, Mary,
the only daughter of Adam, Dominus de Gordon,* a nobleman of great
* All the Gordons in Scotland appear to be descended from Adam, Dominus de
Gordon . His original seat was at Huntly or Hundeley, upon the borders ; but upon
his obtaining from King Robert the Brace a grant of the noble lordship of Strabolgie,
&c. in Aberdeenshire, then in the gift of the crown, by the forfeiture of David de
Hastings de Strabolgie, Earl of Athol, he removed to the north, fixed his residence
there, and gave to these lands and lordship the name of Huntly, which has been one
of the chief titles of his family ever since.