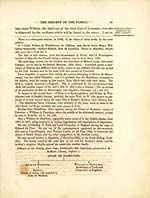 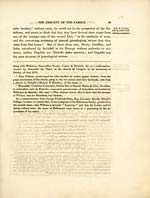 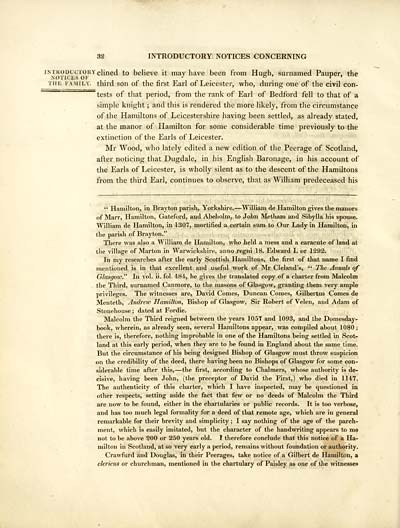 32 INTRODUCTORY NOTICES CONCERNING
introductory c lined to believe it may have been from Hugh, surnamed Pauper, the
the family, third son of the first Earl of Leicester, who, during one of the civil con-
gests of that period, from the rank of Earl of Bedford fell to that of a
simple knight ; and this is rendered the more likely, from the circumstance
of the Hamiltons of Leicestershire having been settled, as already stated,
at the manor of Hamilton for some considerable time previously to the
extinction of the Earls of Leicester.
Mr Wood, who lately edited a new edition of the Peerage of Scotland,
after noticing that Dugdale, in his English Baronage, in his account of
the Earls of Leicester, is wholly silent as to the descent of the Hamiltons
from the third Earl, continues to observe, that as William predeceased his
" Hamilton, in Bray ton parish, Yorkshire. — William de Hamilton gives the manors
of Marr, Hamilton, Gateford, and Abeholm, to John Metham and Sibylla his spouse.
William de Hamilton, in 1307, mortified a certain sum to Our Lady in Hamilton, in
the parish of Brayton."
There was also a William de Hamilton, who held a mess and a caracute of land at
the village of Marton in Warwickshire, anno regni 18. Edward I. or 1292.
In my researches after the early Scottish Hamiltons, the first of that name I find
mentioned is in that excellent and useful work of Mr Cleland's, " The Annals of
Glasgow." In vol. ii. fol. 484, he gives the translated copy of a charter from Malcolm
the Third, surnamed Canmore, to the masons of Glasgow, granting them very ample
privileges. The witnesses are, David Comes, Duncan Comes, Gilbertus Comes de
Menteth, Andrew Hamilton, Bishop of Glasgow, Sir Robert of Velen, and Adam of
Stonehouse ; dated at Fordie.
Malcolm the Third reigned between the years 105T and 1093, and the Domesday-
book, wherein, as already seen, several Hamiltons appear, was compiled about 1080 ;
there is, therefore, nothing improbable in one of the Hamiltons being settled in Scot-
land at this early period, when they are to be found in England about the same time.
But the circumstance of his being designed Bishop of Glasgow must throw suspicion
on the credibility of the deed, there having been no Bishops of Glasgow for some con-
siderable time after this, — the first, according to Chalmers, whose authority is de-
cisive, having been John, (the preceptor of David the First,) who died in 1147.
The authenticity of this charter, which I have inspected, may be questioned in
other respects, setting aside the fact that few or no deeds of Malcolm the Third
are now to be found, either in the chartularies or public records. It is too verbose,
and has too much legal formality for a deed of that remote age, which are in general
remarkable for their brevity and simplicity ; I say nothing of the age of the parch-
ment, which is easily imitated, but the character of the handwriting appears to me
not to be above 200 or 250 years old. I therefore conclude that this notice of a Ha-
milton in Scotland, at so very early a period, remains without foundation or authority.
Crawfurd and Douglas, in their Peerages, take notice of a Gilbert de Hamilton, a
clericus or churchman, mentioned in the chartulary of Paisley as one of the witnesses