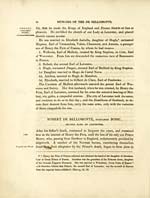 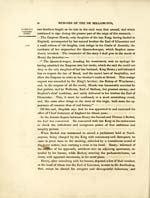 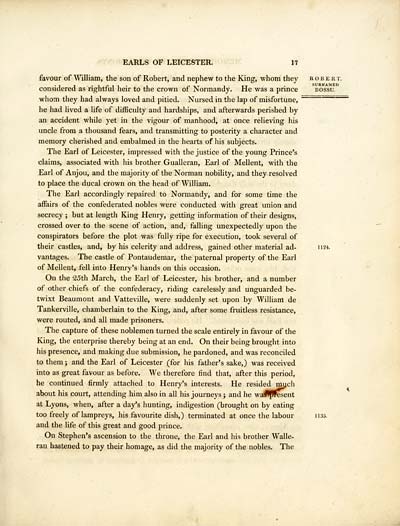 EARLS OF LEICESTER. 17
favour of William, the son of Robert, and nephew to the King, whom they Robert,
considered as rightful heir to the crown of Normandy. He was a prince bossu.
whom they had always loved and pitied. Nursed in the lap of misfortune, ~
he had lived a life of difficulty and hardships, and afterwards perished by
an accident while yet in the vigour of manhood, at once relieving his
uncle from a thousand fears, and transmitting to posterity a character and
memory cherished and embalmed in the hearts of his subjects.
The Earl of Leicester, impressed with the justice of the young Prince's
claims, associated with his brother Gualleran, Earl of Mellent, with the
Earl of Anjou, and the majority of the Norman nobility, and they resolved
to place the ducal crown on the head of William.
The Earl accordingly repaired to Normandy, and for some time the
affairs of the confederated nobles were conducted with great union and
secrecy ; but at length King Henry, getting information of their designs,
crossed over to the scene of action, and, falling unexpectedly upon the
conspirators before the plot was fully ripe for execution, took several of
their castles, and, by his celerity and address, gained other material ad- n-24.
vantages. The castle of Pontaudemar, the paternal property of the Earl
of Mellent, fell into Henry's hands on this occasion.
On the 25th March, the Earl of Leicester, his brother, and a number
of other chiefs of the confederacy, riding carelessly and unguarded be-
twixt Beaumont and Vatteville, were suddenly set upon by Wdliam de
Tankerville, chamberlain to the King, and, after some fruitless resistance,
were routed, and all made prisoners.
The capture of these noblemen turned the scale entirely in favour of the
King, the enterprise thereby being at an end. On their being brought into
his presence, and making due submission, he pardoned, and was reconciled
to them ; and the Earl of Leicester (for his father's sake,) was received
into as great favour as before. We therefore find that, after this period,
he continued firmly attached to Henry's interests. He resided much
about his court, attending him also in all his journeys j and he wadftfesent
at Lyons, when, after a day's hunting, indigestion (brought on by eating
too freely of lampreys, his favourite dish,) terminated at once the labour 1135.
and the life of this great and good prince.
On Stephen's ascension to the throne, the Earl and his brother Walle-
ran hastened to pay their homage, as did the majority of the nobles. The