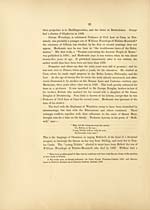 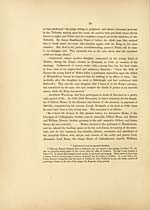 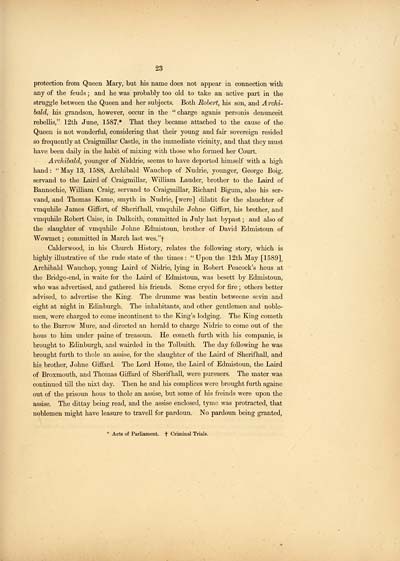 23
protection from Queen Mary, but his name does not appear in connection with
any of the feuds ; and he was probably too old to take an active part in the
struggle between the Queen and her subjects. Both Robert, his son, and Archi-
bald, his grandson, however, occur in the " charge aganis personis denunceit
rebellis," 12th June, 1587.* That they became attached to the cause of the
Queen is not wonderful, considering that their young and fair sovereign resided
so frequently at Craigmillar Castle, in the immediate vicinity, and that they must
have been daily in the habit of mixing with those who formed her Court.
Archibald, younger of Niddrie, seems to have deported himself with a high
hand: "May 13, 1588, Archibald Wauchop of Nudrie, younger, George Boig,
servand to the Laird of Craigmdlar, William Lauder, brother to the Laird of
Bannochie, Williani Craig, servand to Craigmillar, Richard Bigum, also his ser-
vand, and Thomas Kame, smyth in Nudrie, [were] dilatit for the slauchter of
vmqulnle James Giffert, of Sherifhall, vmquhile Johne Giffert, his brother, and
vmquhile Robert Caise, in Dalkeith, committed in July last bypast ; and also of
the slaughter of vmquhile Johne Edmistoun, brother of David Edmistoun of
Wowmet ; committed in March last wes."f
Calderwood, in his Church History, relates the following story, which is
highly illustrative of the rude state of the times : " Upon the 12th May [1589],
Archibald Wauchop, young Laird of Nidrie, lying in Robert Peacock's hous at
the Bridge-end, in waite for the Laird of Edmistoun, was besett by Edmistoun,
who was advertised, and gathered his friends. Some cryed for fire ; others better
advised, to advertise the King. The drurnme was beatin betweene sevin and
eight at night in Edinburgh. The inhabitants, and other gentlemen and noble-
men, were charged to come incontinent to the King's lodging. The King cometh
to the Burrow Mure, and directed an herald to charge Nidrie to come out of the
hous to him under paine of treasoun. He cometh furth with his companie, is
brought to Edinburgh, and wairded in the Tolbuith. The day following he was
brought furth to thole an assise, for the slaughter of the Laird of Sherifhall, and
his brother, Johne Giffard. The Lord Home, the Laird of Edmistoun, the Laird
of Broxmouth, and Thomas Giffard of Sherifhall, were pursuers. The mater was
continued till the nixt day. Then he and his complices were brought furth againe
out of the prisoun hous to thole an assise, but some of his freinds were upon the
assise. The dittay being read, and the assise enclosed, tymc was protracted, that
noblemen might have leasure to travell for pardoun. No pardoun being granted,
* Acts of Parliament, f Criminal Trials.