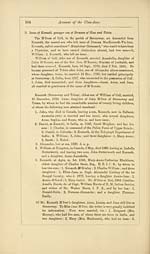 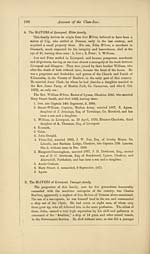 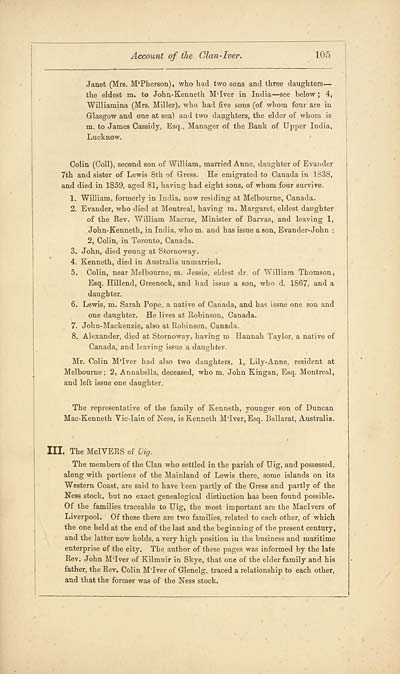 Account of the Clan-Iver. 105
Janet (Mrs. M'Pherson), who had two sons and three daughters —
the eldest m. to John-Kenneth M'lver in India — see below; 4,
Williamina (Mrs. Miller), who had five sons (of whom four are in
Glasgow and one at sea) and two daughters, the elder of whom is
m. to James Cassidy, Esq., Manager of the Bank of Upper India,
Lucknow.
Colin (Coll), second son of William, married Anne, daughter of Evaiider
7th and sister of Lewis 8th of Gress. He emigrated to Canada in 1838,
and died in 1859, aged 81, having had eight sons, of whom four survire.
1. William, formerly in India, now residing at Melbourne, Canada.
2. Evander, who died at Montreal, having m, Margaret, eldest daughter
of the Rev. William Macrae, Minister of Barvas, and leaving 1,
John-Kenneth, in India, who m. and has issue a son, Evander-John ;
2, Colin, in Toronto, Canada.
3. John, died young at Stornoway.
4. Kenneth, died in Australia unmarried.
5. Colin, near Melbourne, m. Jessie, eldest dr. of William Thomson,
Esq. Hillend, Greenock, and had issue a son, who d. 1867, and a
daughter.
6. Lewis, m. Sarah Pope, a native of Canada, and has issue one son and
one daughter. He lives at Robinson, Canada.
7. John-Mackenzie, also at Robinson, Canada.
8. Alexander, died at Stornoway, having m Hannah Taylor, a native of
Canada, and leaving issue a daughter.
Mr. Colin M'lver had also two daughters, 1, Lily-Anne, resident at
Melbourne ; 2, Annabella, deceased, who m. John Kingan, Esq. Montreal,
and left issue one daughter.
The representative of the family of Kenneth, younger son of Duncan
Mac-Kenneth Vic- Iain of Ness, is Kenneth M'lver, Esq. Ballarat, Australia.
III. The McIVERS of Dig.
The members of the Clan who settled in the parish of Uig, and possessed,
along with portions of the Mainland of Lewis there, some islands on its
Western Coast, are said to have been partly of the Gress and partly of the
Ness stock, but no exact genealogical distinction has been found possible.
Of the families traceable to Uig, the most important are the Maclvers of
Liverpool. Of these there are two families, related to each other, of which
the one held at the end of the last and the beginning of the present century,
and the latter now holds, a very high position in the business and maritime
enterprise of the city. The author of these pages was informed by the late
Rev. John M'lver of Kilmuir in Skye, that one of the elder family and his
father, the Rev. Colin MTver of Glenelg, traced a relationship to each other,
and that the former was of the Ness stock.