Heraldry of the Douglases 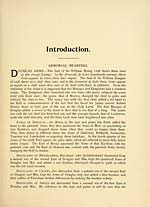 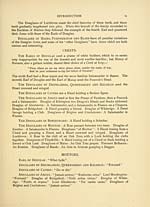 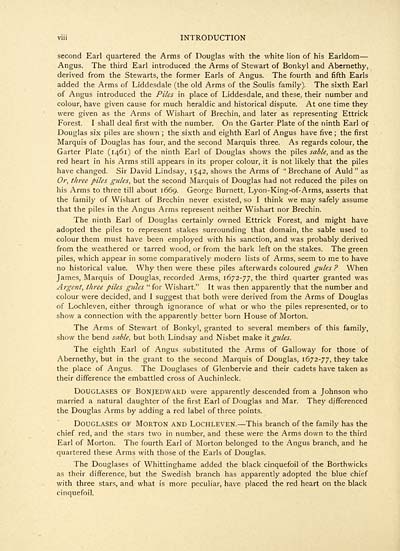 viii INTRODUCTION
second Earl quartered the Arms of Douglas with the white lion of his Earldom —
Angus. The third Earl introduced the Arms of Stewart of Bonkyl and Abernethy,
derived from the Stewarts, the former Earls of Angus. The fourth and fifth Earls
added the Arms of Liddesdale (the old Arms of the Soulis family). The sixth Earl
of Angus introduced the Piles in place of Liddesdale, and these, their number and
colour, have given cause for much heraldic and historical dispute. At one time they
were given as the Arms of Wishart of Brechin, and later as representing Ettrick
Forest. I shall deal first with the number. On the Garter Plate of the ninth Earl of
Douglas six piles are shown ; the sixth and eighth Earl of Angus have five ; the first
Marquis of Douglas has four, and the second Marquis three. As regards colour, the
Garter Plate (1461) of the ninth Earl of Douglas shows the piles sable, and as the
red heart in his Arms still appears in its proper colour, it is not likely that the piles
have changed. Sir David Lindsay, 1542, shows the Arms of " Brechane of Auld " as
Or, three piles gules, but the second Marquis of Douglas had not reduced the piles on
his Arms to three till about 1669. George Burnett, Lyon-King-of-Arms, asserts that
the family of Wishart of Brechin never existed, so I think we may safely assume
that the piles in the Angus Arms represent neither Wishart nor Brechin.
The ninth Earl of Douglas certainly owned Ettrick Forest, and might have
adopted the piles to represent stakes surrounding that domain, the sable used to
colour them must have been employed with his sanction, and was probably derived
from the weathered or tarred wood, or from the bark left on the stakes. The green
piles, which appear in some comparatively modern lists of Arms, seem to me to have
no historical value. Why then were these piles afterwards coloured gules ? When
James, Marquis of Douglas, recorded Arms, 1672-77, the third quarter granted was
Argent, three piles gu'les " for Wishart." It was then apparently that the number and
colour were decided, and I suggest that both were derived from the Arms of Douglas
of Lochleven, either through ignorance of what or who the piles represented, or to
show a connection with the apparently better born House of Morton.
The Arms of Stewart of Bonkyl, granted to several members of this family,
show the bend sable, but both Lindsay and Nisbet make it gules.
The eighth Earl of Angus substituted the Arms of Galloway for those of
Abernethy, but in the grant to the second Marquis of Douglas, 1672-77, they take
the place of Angus. The Douglases of Glenbervie and their cadets have taken as
their difference the embattled cross of Auchinleck.
DOUGLASES OF BONJEDWARD were apparently descended from a Johnson who
married a natural daughter of the first Earl of Douglas and Mar. They differenced
the Douglas Arms by adding a red label of three points.
Douglases of Morton and Lochleven. — This branch of the family has the
chief red, and the stars two in number, and these were the Arms down to the third
Earl of Morton. The fourth Earl of Morton belonged to the Angus branch, and he
quartered these Arms with those of the Earls of Douglas.
The Douglases of Whittinghame added the black cinquefoil of the Borthwicks
as their difference, but the Swedish branch has apparently adopted the blue chief
with three stars, and what is more peculiar, have placed the red heart on the black
cinquefoil.