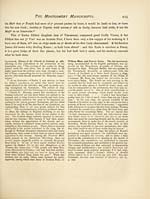 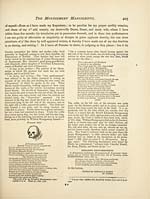 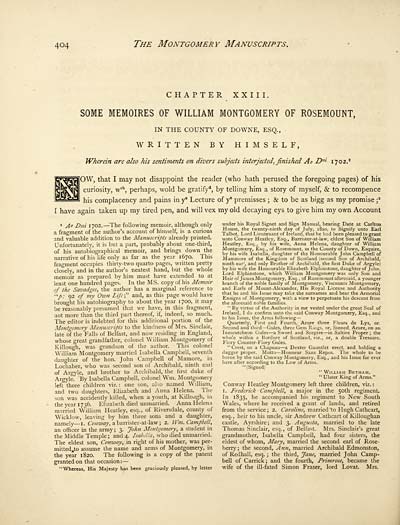 404
The Montgomery Manuscripts.
chapter XXII I.
SOME MEMOIRES OF WILLIAM MONTGOMERY OF ROSEMOUNT,
IN THE COUNTY OF DOWNE, ESQ.,
WRITTEN BY HIMSELF,
Wherein are also his sentiments on divers subjects interjected, finished Ao D' u 1702. 1
OW, that I may not disappoint the reader (who hath perused the foregoing pages) of his
curiosity, w ch , perhaps, wold be gratify 4 , by telling him a story of myself, & to recompence
his complacency and pains in y e Lecture of y 8 premisses ; & to be as bigg as my promise f
I have again taken up my tired pen, and will vex my old decaying eys to give him my own Account
1 A" Dili 1702. — The following memoir, although only
a fragment of the author's account of himself, is a curious
and valuable addition to the Manuscripts already printed.
Unfortunately, it is but a part, probably about one-third,
of his autobiographical memoir, and brings down the
narrative of his life only as far as the year 1670. This
fragment occupies thirty-two quarto pages, written pretty
closely, and in the author's neatest hand, but the whole
memoir as prepared by him must have extended to at
least one hundred pages. In the MS. copy of his Memoir
of the Savadges, the author has a marginal reference to
•'/>: 92 of my Own Life-" and, as this page would have
brought his autobiography to about the year 1700, it may
be reasonably presumed that we have, in this fragment,
not more than the third part thereof, if, indeed, so much.
The editor is indebted for this additional portion of the
Montgomery Manuscripts to the kindness of Mrs. Sinclair,
late of the Falls of Belfast, and now residing in England,
whose great grandfather, colonel William Montgomery of
Killough, was grandson of the author. This colonel
William Montgomery married Isabella Campbell, seventh
daughter of the hon. John Campbell of Mamore, in
Lochaber, who was second son of Archibald, ninth earl
of Argyle, and brother to Archibald, the first duke of
Argyle. By Isabella Campbell, colonel Wm. Montgomery
left three children viz.: one son, also named William,
and two daughters, Elizabeth and Anna Helena. The
son was accidently killed, when a youth, at Killough, in
the year 1736. Elizabeth died unmarried. Anna Helena
married William Heatley, esq., of Riversdale, county of
Wicklow, leaving by him three sons and a daughter,
namely — I. Conway, a barrister-at-law ; 2. Wm. Campbell ,
an officer in the army ; 3. John Montgomery, a student in
the Middle Temple ; and 4. Isabella, who died unmarried.
The eldest son, Conway, in right of his mother, was per-
mitted.to assume the name and arms of Montgomery, in
the year 1820. The following is a copy of the patent
granted on that occasion : —
"Whereas, His Majesty has been graciously pleased, by letter
under his Royal Signet and Sign Manual, bearing Date at Carlton
House, the twenty-ninth day of July, 1820, to Signify unto Earl
Talbot, Lord Lieutenant of Ireland, that he had been pleased to grant
unto Conway Heatley, Esq., Barrister-at-law, eldest Son of William
Heatley, Esq., by his wife, Anna Helena, daughter of William
Montgomery, Esq., of Rosemount, in the County of Down, Esquire,
by his wife Isabella, daughter of the Honourable John Campbell of
Mammore of the Kingdom of Scotland (second Son of Archibald,
ninth ear 1 , and only Brother of Archibald, the first Duke of Argyle)
by his wife the Honourable Elizabeth Elphinstone, daughter of John,
Lord Elphinstone, which William Montgomery was only Son and
Heir of James Montgomery, Esq., of Rosemount aforesaid, a younger
branch of the noble family of Montgomery, Viscounts Montgomery,
and Earls of Mount-Alexander, His Royal License and Authority
that he and his Issue may take the surnames and bear the Armorial
Ensigns of Montgomery, with a view to perpetuate his descent from
the aforesaid noble families.
" By virtue of the Authority in me vested under the great Seal of
Ireland, I do confirm unto the said Conway Montgomery, Esq., and
to his Issue, the Arms following —
Quarterly, First and Fourth, Azure three Fleurs de Lys, or.
Second and third — Gules, three Gem Rings, or, Stoned, Azure, on an
Inescutcheon Gules — a Sword and Sceptre — in Saltire Proper; the
whole within a Bordure of Scotland, viz., or, a double Tressure.
Flory Counter-Flory Gules.
" Crest, on a Chapeau — a Dexter Gauntlet erect, and holding a
dagger proper. Motto — Honneur Sans Repos. The whole to be
borne by the said Conway Montgomery, Esq., and his Issue for ever
here after according to the Law of Arms.
"(Signed;
" William Betham.
" Ulster King of Arms."
Conway Heatley Montgomery left three children, viz. :
I. Frederick Campbell, a major in the 50th regiment.
In 1835, he accompanied his regiment to New South
Wales, where he received a grant of lands, and retired
from the service ; 2. Caroline, married to Hugh Cathcart,
esq., heir to his uncle, sir Andrew Cathcart of Killoughan
castle, Ayrshire; and 3. Augusta, married to the late
Thomas Sinclair, esq., of Belfast. Mrs. Sinclair's great
grandmother, Isabella Campbell, had four sisters, the
eldest of whom, Mary, married the second earl of Rose-
berry; the second, Ann, married Archibald Edmonston,
of Redhall, esq. ; the third, fane, married John Camp-
bell of Carrick ; and the fourth, Primrose, became the
wife of the ill-fated Simon Fraser, lord Lovat. Mrs.