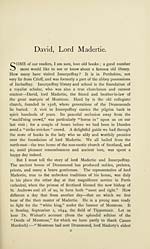 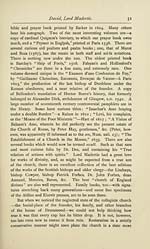 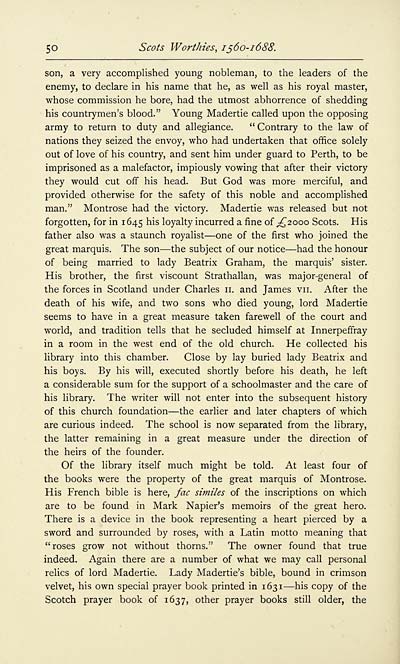 50 Scots Wort hies, 1 560- 1688.
son, a very accomplished young nobleman, to the leaders of the
enemy, to declare in his name that he, as well as his royal master,
whose commission he bore, had the utmost abhorrence of shedding
his countrymen's blood." Young Madertie called upon the opposing
army to return to duty and allegiance. " Contrary to the law of
nations they seized the envoy, who had undertaken that office solely
out of love of his country, and sent him under guard to Perth, to be
imprisoned as a malefactor, impiously vowing that after their victory
they would cut off his head. But God was more merciful, and
provided otherwise for the safety of this noble and accomplished
man." Montrose had the victory. Madertie was released but not
forgotten, for in 1645 his loyalty incurred a fine of ^2000 Scots. His
father also was a staunch royalist — one of the first who joined the
great marquis. The son — the subject of our notice — had the honour
of being married to lady Beatrix Graham, the marquis' sister.
His brother, the first viscount Strathallan, was major-general of
the forces in Scotland under Charles 11. and James vn. After the
death of his wife, and two sons who died young, lord Madertie
seems to have in a great measure taken farewell of the court and
world, and tradition tells that he secluded himself at Innerpeffray
in a room in the west end of the old church. He collected his
library into this chamber. Close by lay buried lady Beatrix and
his boys. By his will, executed shortly before his death, he left
a considerable sum for the support of a schoolmaster and the care of
his library. The writer will not enter into the subsequent history
of this church foundation — the earlier and later chapters of which
are curious indeed. The school is now separated from the library,
the latter remaining in a great measure under the direction of
the heirs of the founder.
Of the library itself much might be told. At least four of
the books were the property of the great marquis of Montrose.
His French bible is here, fac similes of the inscriptions on which
are to be found in Mark Napier's memoirs of the great hero.
There is a device in the book representing a heart pierced by a
sword and surrounded by roses, with a Latin motto meaning that
"roses grow not without thorns." The owner found that true
indeed. Again there are a number of what we may call personal
relics of lord Madertie. Lady Madertie's bible, bound in crimson
velvet, his own special prayer book printed in 1631 — his copy of the
Scotch prayer book of 1637, other prayer books still older, the