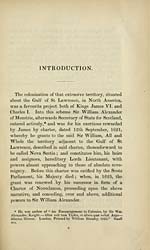 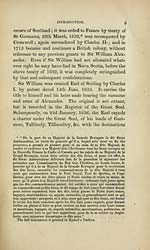 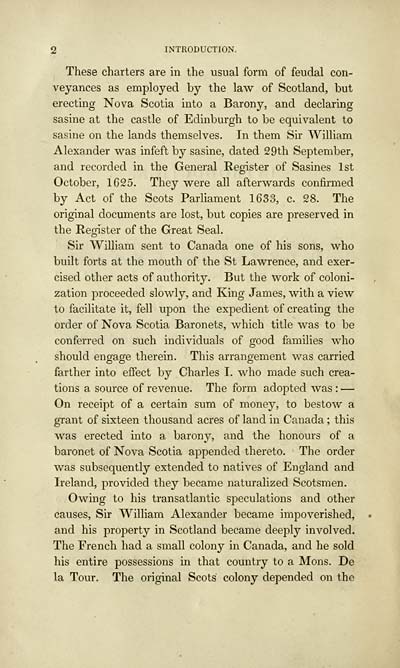 2 INTRODUCTION.
These charters are in the usual form of feudal con-
veyances as employed by the law of Scotland, but
erecting Nova Scotia into a Barony, and declaring
sasine at the castle of Edinburgh to be equivalent to
sasine on the lands themselves. In them Sir William
Alexander was infeft by sasine, dated 29th September,
and recorded in the General Register of Sasines 1st
October, 1625. They were all afterwards confirmed
by Act of the Scots Parliament 1633, c. 28. The
original documents are lost, but copies are preserved in
the Register of the Great Seal.
Sir William sent to Canada one of his sons, who
built forts at the mouth of the St Lawrence, and exer-
cised other acts of authority. But the work of coloni-
zation proceeded slowly, and King James, with a view
to facilitate it, fell upon the expedient of creating the
order of Nova Scotia Baronets, which title was to be
conferred on such individuals of good families who
should engage therein. This arrangement was carried
farther into effect by Charles I. who made such crea-
tions a source of revenue. The form adopted was : —
On receipt of a certain sum of money, to bestow a
grant of sixteen thousand acres of land in Canada ; this
was erected into a barony, and the honours of a
baronet of Nova Scotia appended thereto. The order
was subsequently extended to natives of England and
Ireland, j^rovided they became naturalized Scotsmen.
Owing to his transatlantic speculations and other
causes. Sir William Alexander became impoverished,
and his property in Scotland became deeply involved.
The French had a small colony in Canada, and he sold
his entire possessions in that country to a Mons. De
la Tour. The original Scots colony depended on the