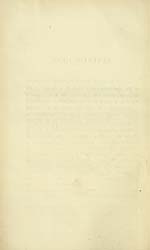 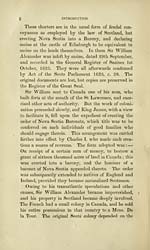 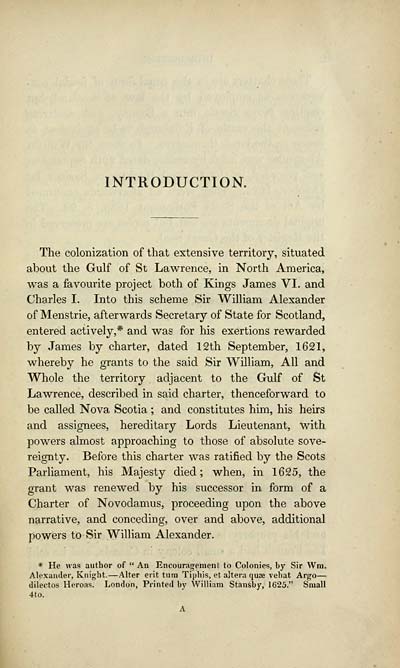 INTRODUCTION.
The colonization of that extensive territory, situated
about the Gulf of St Lawrence, in North America,
was a favourite project both of Kings James VI. and
Charles I. Into this scheme Sir William Alexander
of Menstrie, afterwards Secretary of State for Scotland,
entered actively,* and was for his exertions rewarded
by James by charter, dated 12th September, 1621,
whereby he grants to the said Sir William, All and
Whole the territory adjacent to the Gulf of St
Lawrence, described in said charter, thenceforward to
be called Nova Scotia ; and constitutes him, his heirs
and assignees, hereditary Lords Lieutenant, with
powers almost approaching to those of absolute sove-
reignty. Before this charter was ratified by the Scots
Parliament, his Majesty died; when, in 1625, the
grant was renewed by his successor in form of a
Charter of Novodamus, proceeding upon the above
narrative, and conceding, over and above, additional
powers to Sir William Alexander.
* He ivas author of " An Encouragement to Colonies, by Sir Wra.
Alexander, Knight. — Alter erit turn Tiphis, et altera quse vehat Argo —
dilectos Heroas. London, Printed by William Stansby, 1625." Small
4to.