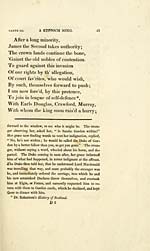 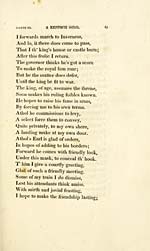 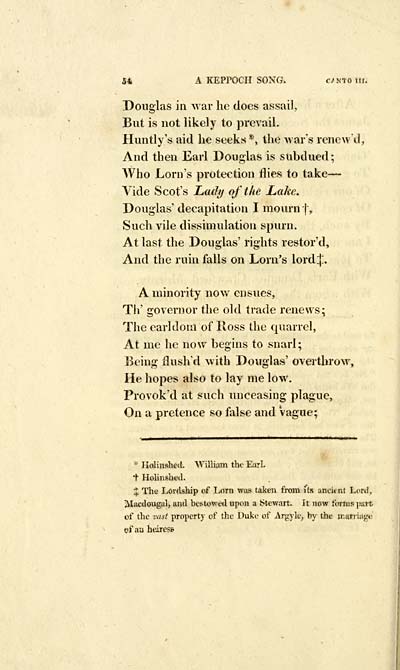 54 A KEPPOCH SONG. c/ntoiii.
Douglas in war he does assail,
But is not likely to prevail.
Huntly's aid he seeks *> the war's renew'd,
And then Earl Douglas is subdued;
Who Lorn's protection flies to take —
Vide Scots Lady of the Lake.
Douglas' decapitation I mourn)",
Such vile dissimulation spurn.
At last the Douglas' rights restor'd,
And the ruin falls on Lorn's lord J.
A minority now ensues,
Tii' governor the old trade renews;
The earldom of Ross the quarrel,
At me he now begins to snarl;
Being flush'd with Douglas' overthrow,
He hopes also to lay me low.
Provok'd at snch unceasing plague,
On a pretence so false and Vague;
* Holinshed. William the Earl.
t Holinshed.
% The Lordship of Lorn was taken from its ancient Lord,
^Vlacdougal, and bestowed upon a Stewart. It now forms part
of the vast property of the Duke of Argylc, by the ir.arri;igr
of aa heiress