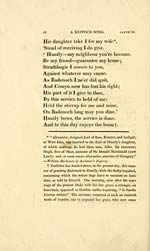 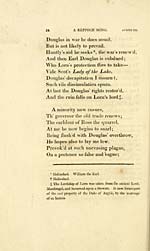 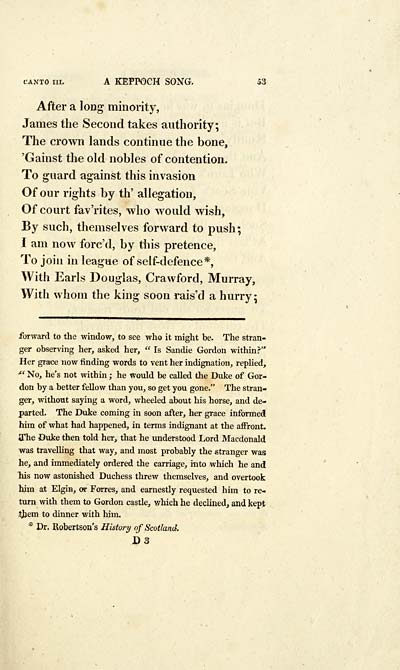 t-ANTO in. A KEPPOCH SONG. 53
After a long minority,
James the Second takes authority;
The crown lands continue the bone,
'Gainst the old nobles of contention.
To guard against this invasion
Of our rights by th' allegation,
Of court fav'rites, who would wish,
By such, themselves forward to push;
I am now forc'd, by this pretence,
To join in league of self-defence*,
With Earls Douglas, Crawford, Murray,
With whom the king soon rais'cl a hurry;
forward to the window, to see who it might be. The stran-
ger observing her, asked her, " Is Sandie Gordon within?"
Her grace now finding words to vent her indignation, replied,
■" No, he's not within ; he would be called the Duke of Gor-
don by a better fellow than you, so get you gone." The stran-
ger, without saying a word, wheeled about his horse, and de-
parted. The Duke coming in soon after, her grace informed
him of what had happened, in terms indignant at the affront.
{The Duke then told her, that he understood Lord Macdonald
was travelling that way, and most probably the stranger was
he, and immediately ordered the carriage, into which he and
his now astonished Duchess threw themselves, and overtook
him at Elgin, or Forres, and earnestly requested him to re-
turn with them to Gordon castle, which he declined, and kept
them to dinner with him.
* Dr. Robertson's History of Scotland.
D3