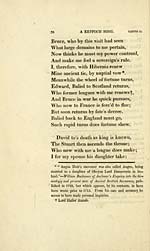 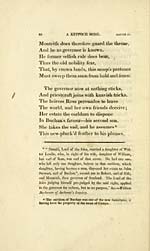 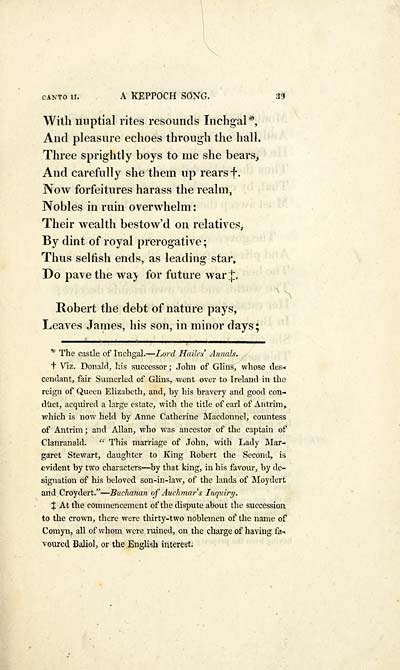 x ^
canto it. A KEPPOCH SONG.
Willi nuptial rites resounds Inchgal*,
And pleasure echoes through the hall.
Three sprightly boys to me she bears,
And carefully she them up rears f.
Now forfeitures harass the realm,
Nobles in ruin overwhelm :
Their wealth bestow'd on relatives,
By dint of royal prerogative;
Thus selfish ends, as leading star,
Do pave the wa\ for future war:}:.
Robert the debt of nature pays,
Leaves James, his son, in minor days}
* The castle of Inchgal. — Lord Hailes' Annals. .
t Viz. Donald, his successor; John of Glins, whose des-«
cendant, fair Sumerled of Glins, went over to Ireland in the
reign of Queen Elizabeth, and, by his bravery and good con-
duct, acquired a large estate, with the title of earl of Antrim,
which is now held by Anne Catherine Macdonnel, countess
of Antrim ; and Allan, who was ancestor of the captain of
Clanranald. " This marriage of John, with Lady Mar-
garet Stewart, daughter to King Robert the Second, is
evident by two characters — by that king, in his favour, by de-
signation of his beloved son-in-law, of the lands of Moydert
and Croydert." — Buchanan of Auchnar's Inquiry.
% At the commencement of the dispute about the succession
to the crown, there were thirty-two noblemen of the name of
Comyn, all of whom were ruined, on the charge of having fa-«
voured Baliol, or the English interest.