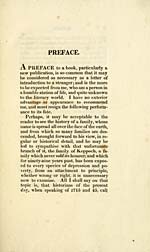 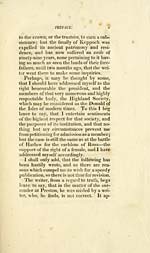 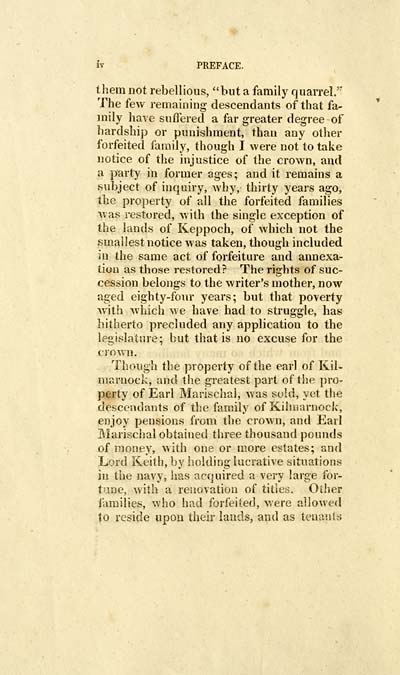 iv PREFACE.
them not rebellious, "but a family quarrel.''
The few remaining descendants of that fa-
mily have suffered a far greater degree of
hardship or punishment, than any other
forfeited family, though I were not to take
notice of the injustice of the crown, and
a party in former ages; and it remains a
subject of inquiry, why, thirty years ago,
the property of all the forfeited families
was restored, with the single exception of
the lands of Keppoch, of which not the
smallest notice was taken, though included
m the same act of forfeiture and annexa-
tion as those restored? The rights of suc-
cession belongs to the writer's mother, now
aged eighty-four years; but that poverty
with which we have had to struggle, has
hitherto precluded any application to the
legislature; but that is no excuse for the
crown.
Though the property of the earl of Kil-
marnock, and the greatest part of the pro-
perty of Earl Marischal, was sold, yet the
descendants of the family of Kilmarnock,
enjoy pensions from the crown, and Earl
Marischal obtained three thousand pounds
of money, with one or more estates; and
Lord Keith, by holding lucrative situations
in the navy, has acquired a very large for-
tune, with a renovation of titles. Other
families, who had forfeited, were allowed
to reside upon their lands, and as tenant?;