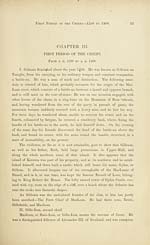 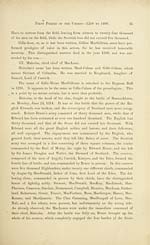 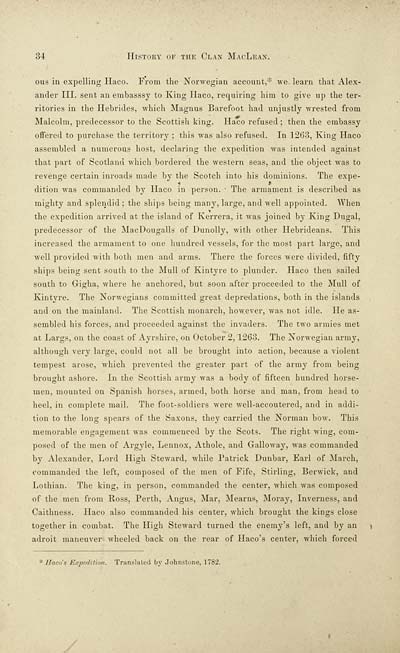 34 History of the Clan MacLean.
ous in expelling Haco. From the Norwegian account,* we. learn that Alex-
ander III. sent an embasssy to King Haco, requiring him to give up the ter-
ritories in the Hebrides, which Magnus Barefoot had unjustly wrested from
Malcolm, predecessor to the Scottish king. Haco refused ; then the embassy
offered to purchase the territory ; this was also refused. In 1263, King Haco
assembled a numerous host, declaring the expedition was intended against
that part of Scotland which bordered the western seas, and the object was to
revenge certain inroads made by the Scotch into his dominions. The expe-
dition was commanded by Haco in person. ■ The armament is described as
mighty and splendid ; the ships being many, large, and well appointed. When
the expedition arrived at the island of Kerrera, it was joined by King Dugal,
predecessor of the MacDougalls of Dunolly, with other Hebrideans. This
increased the armament to one hundred vessels, for the most part large, and
well provided with both men and arms. There the forces were divided, fifty
ships being sent south to the Mull of Kintyre to plunder. Haco then sailed
south to Gigha, where he anchored, but soon after proceeded to the Mull of
Kintyre. The Norwegians committed great depredations, both in the islands
and on the mainland. The Scottish monarch, however, was not idle. He as-
sembled his forces, and proceeded against the invaders. The two armies met
at Largs, on the coast of Ayrshire, on October 2, 1263. The Norwegian army,
although very large, could not all be brought into action, because a violent
tempest arose, which prevented the greater part of the army from being
brought ashore. In the Scottish army was a body of fifteen hundred horse-
men, mounted on Spanish horses, armed, both horse and man, from head to
heel, in complete mail. The foot-soldiers were well-accoutered, and in addi-
tion to the long spears of the Saxons, they carried the Norman bow. This
memorable engagement was commenced by the Scots. The right wing, com-
posed of the men of Arg^de, Lennox, Athole, and Galloway, was commanded
by Alexander, Lord High Steward, while Patrick Dunbar, Earl of March,
commanded the left, composed of the men of Fife, Stirling, Berwick, and
Lothian. The king, in person, commanded the center, which was composed
of the men from Ross, Perth, Angus, Mar, Mearns, Moray, Inverness, and
Caithness. Haco also commanded his center, which brought the kings close
together in combat. The High Steward turned the enemy's left, and by an
adroit maneuver wheeled back on the rear of Haco's center, which forced
^' Ilacij's E.i-pcdiUoii. TriinsUiled b_v Johnstone, 1782.