Historical and genealogical essay upon the family and surname of Buchanan 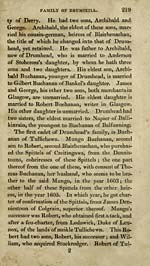 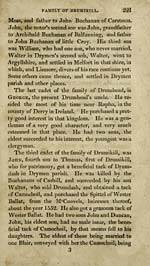 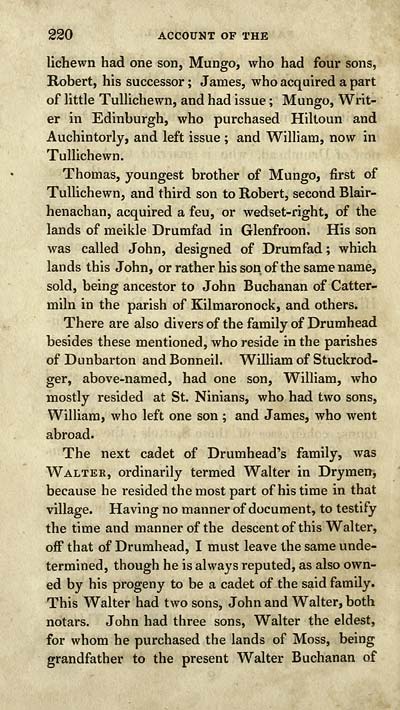 220 ACCOUNT OF THE
Uchewn had one son, Mungo, who had four sons,
Robert, his successor ; James, who acquired a part
of little Tullichewn, and had issue ; Mungo, Writ-
er in Edinburgh, who purchased Hiltoun and
Auchintorly, and left issue ; and William, now in
Tullichewn.
Thomas, youngest brother of Mungo, first of
Tullichewn, and third son to Robert, second Blair-
henachan, acquired a feu, or wedset-right, of the
lands of meikle Drumfad in Glenfroon. His son
was called John, designed of Drumfad ; which
lands this John, or rather his son of the same name,
sold, being ancestor to John Buchanan of Catter-
miln in the parish of Kilmaronock, and others.
There are also divers of the family of Drumhead
besides these mentioned, who reside in the parishes
of Dumbarton and Bonneil. William of Stuckrod-
ger, above-named, had one son, William, who
mostly resided at St. Ninians, who had two sons,
William, who left one son ; and James, who went
abroad.
The next cadet of Drumhead's family, was
Waltek, ordinarily termed Walter in Dry men,
because he resided the most part of his time in that
village. Having no manner of document, to testify
the time and manner of the descent of this Walter,
off that of Drumhead, I must leave the same unde-
termined, though he is always reputed, as also own-
ed by his progeny to be a cadet of the said family.
This Walter had two sons, John and Walter, both
notars. John had three sons, Walter the eldest,
for whom he purchased the lands of Moss, being
grandfather to the present Walter Buchanan of