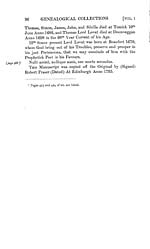 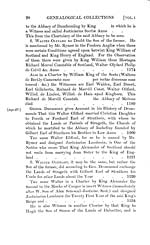 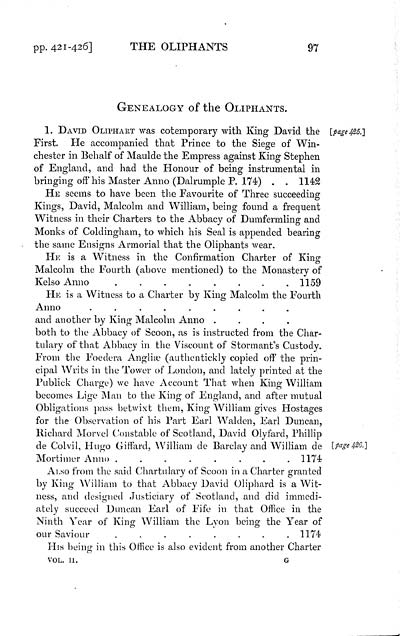 GENEALOGY of the OLIPHANTS.

1. DAVID OLIPHART was cotemporary with King David the
First. He accompanied that Prince to the Siege of Win-
chester in Behalf of Maulde the Empress against King Stephen
of England, and had the Honour of being instrumental in
bringing off his Master Anno (Dalrumple P. 174) . . 1142

HE seems to have been the Favourite of Three succeeding
Kings, David, Malcolm and William, being found a frequent
Witness in their Charters to the Abbacy of Dumfermling and
Monks of Coldingham, to which his Seal is appended bearing
the same Ensigns Armorial that the Oliphants wear.

HE is a Witness to a Charter by King Malcolm the Fourth
Anno            . . . . . . . . .
and another by King Malcolm Anno . . . .
both to the Abbacy of Scoon, as is instructed from the Char-
tulary of that Abbacy in the Viscount of Stormant's Custody.
From the Foedera Angliæ (authentickly copied off the prin-
cipal Writs in the Tower of London, and lately printed at the
Publick Charge) we have Account That when King William
becomes Lige Man to the King of England, and after mutual
Obligations pass betwixt them, King William gives Hostages
for the Observation of his Part Earl Walden, Earl Duncan,
Richard Morvel Constable of Scotland, David Olyfard, Phillip
de Colvil, Hugo Giffard, William de Barclay and William de
Mortimer Anno . . . . . . . . 1174

ALSO from the said Chartulary of Scoon in a Charter granted
by King William to that Abbacy David Oliphard is a Wit-
ness, and designed Justiciary of Scotland, and did immedi-
ately succeed Duncan Earl of Fife in that Office in the
Ninth Year of King William the Lyon being the Year of
our Saviour          . . . . . . . . 1174

HIS being in this Office is also evident from another Charter