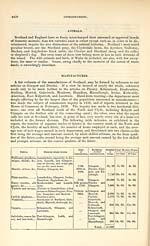 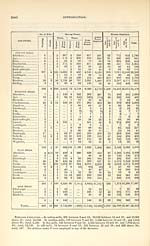 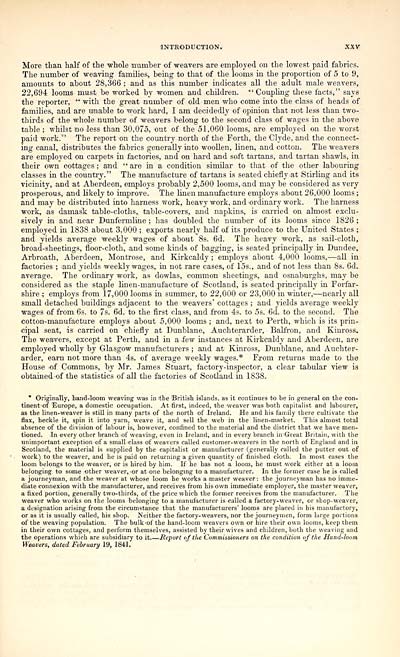 INTRODUCTION. XXV
More than half of the whole number of weavers are employed on the lowest paid fabrics.
The number of weaving families., being to that of the looms in the proportion of 5 to 9,
amounts to about 28,366 ; and as this number indicates all the adult male weavers,
22,694 looms must be worked by women and children, ■"Coupling these facts," says
the reporter, " with the great number of old men who come into the class of heads of
families, and are usable to work hard, I am decidedly of opinion that not less than two-
thirds of the whole number of weavers belong to the second class of wages in the above
table ; whilst no less than 30,075, out of the 51,060 looms, are employed on the worst
paid work."" The report on the country north of the Forth, the Clyde, and the connect-
ing canal, distributes the fabrics generally into woollen, linen, and cotton. The weavers
are employed on carpets in factories, and on hard and soft tartans, and tartan shawls, in
their own oottages ; and "are in a condition similar to that of the other labouring
classes in the country." The manufacture of tartans is seated chiefly at Stirling and its
vicinity, and at Aberdeen, employs probably 2,500 looms, and may be considered as very
prosperous, and likely to improve. The linen manufacture employs about 26,000 looms ;
and may be distributed into harness work, heavy work, and ordinary work. The harness
work, as damask table-cloths, table-covers, and napkins, is carried on almost exclu-
sively in and near Dunfermline ; has doubled the number of its looms since 1826 ;
employed in 1838 about 3.000 ; exports nearly half of its produce to the United States ;
and yields average weekly wages of about 8s. 6d. The heavy work, as sail-cloth,
broad-sheetings, floor-cloth, and some kinds of bagging, is seated principally in Dundee,
Arbroath, Aberdeen, Montrose, and Kirkcaldy ; employs about 4,000 looms, — all in
factories ; and yields weekly wages, in not rare cases, of 15s., and of not less than 8s. 6d.
average. The ordinary work, as dowlas, common sheetings, and osnaburghs, may be
considered as the staple linen-manufacture of Scotland, is seated principally in Forfar-
shire ; employs from 17,000 looms in summer, to 22,000 or 23,000 in winter, — nearly all
small detached buildings adjacent to the weavers' cottages ; and yields average weekly
wages of from 6s. to 7s. 6d. to the first class, and from 4s. to 5s. 6d. to the second. The
cotton-manufacture employs about 5,000 looms ; and, next to Perth, which is its prin-
cipal seat, is carried on chiefly at Dunblane, Aucbterarder, Balfron, and Kinross.
The weavers, except at Perth, and in a few instances at Kirkcaldy and Aberdeen, are
employed wholly by Glasgow manufacturers ; and at Kinross, Dunblane, and Auchter-
arder, earn not more than 4s. of average weekly wages.* From returns made to the
House of Commons, by Mr. James Stuart, factory-inspector, a clear tabular view is
obtained of the statistics of all the factories of Scotland in 1838.
* Originally, hand-loom weaving was in 'the British islands, as it continues to be in general on the con-
tinent of Europe, a domestic occupation. At first, indeed, the weaver was both capitalist and labourer,
as the linen-weaver is still in many parts of the north of Ireland. He and his family there cultivate the
flax, heckle it, s,pin it into yarn, weave it, and sell the web in the linen-market. This almost total
absence of the division of labour is, however, confined to the material and the district that we have men-
tioned. In every other branch of weaving, even in Ireland, and in every branch in Great Britain, with the
unimportant exception of a small class of weavers called customer-weavers in the north of England and in
Scotland, the material is supplied by the capitalist or manufacturer (generally called the putter out of
work) to the weaver, and he is paid on returning a given quantity of finished cloth. In most cases the
loom belongs to the weaver, or is hired by him. If he has not a loom, he must work either at a loom
belonging to some other weaver, or at one belonging to a manufacturer. In the former case he is called
a journeyman, and the weaver at whose loom he works a master weaver: the journeyman has no imme-
diate connexion with the manufacturer, and receives from his own immediate employer, the master weaver,
a fixed portion, generally two-thirds, of the price which the former receives from the manufacturer. The
weaver who works on the looms belonging to a manufacturer is called a factory- weaver, or shop-weaver,
a designation arising from the circumstance that the manufacturers' looms are placed in his manufactory,
or as it is usually called, his shop. Neither the factory- weavers, nor the journeymen, form large portions
of the weaving population. The bulk'of the hand-loom weavers own or hire their own looms, keep them
in their own cottages, and perform themselves, assisted by their wives and children, both the weaving and
the operations which are subsidiary to it. — Report of the Commissio7ters on the condition of the Hand-loom
Weavers, dated February 19, 1841.