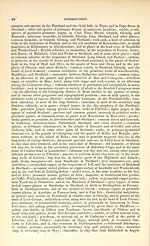 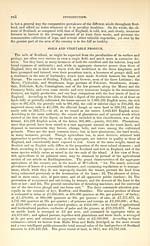 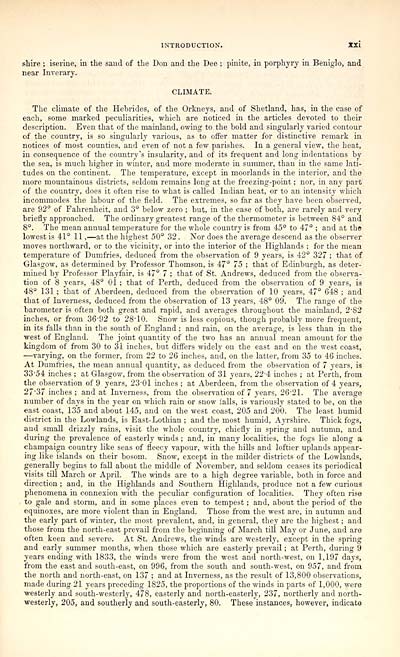 INTRODUCTION. XXI
sliire ; iserine, in the sand of the Don and the Dee ; pinite, in porphyry in Beniglo, and
near Inverary.
CLIMATE.
The climate of the Hebrides, of the Orkneys, and of Shetland, has, in the case of
each, some marked peculiarities, which are noticed in the articles devoted to their
description. Even that of the mainland, owing to the bold and singularly varied contour
of the country, is so singularly various, as to offer matter for distinctive remark in
notices of most counties, and even of not a few parishes. In a general view, the heat,
in consequence of the country's insularity, and of its frequent and long indentations by
the sea, is much higher in winter, and more moderate in summer, than in the same lati-
tudes on the continent. The temperature, except in moorlands in the interior, and the
more mountainous districts, seldom remains long at the freezing-point ; nor, in any part
of the country, does it often rise to what is called Indian heat, or to an intensity which
incommodes the labour of the field. The extremes, so far as they have been observed,
are 92° of Fahrenheit, and 3° below zero ; but, in the case of both, are rarely and very
briefly approached. The ordinary greatest range of the thermometer is between 84° and
8°. The mean annual temperature for the whole country is from 45° to 47° ; and at the
lowest is 41° 11 , — at the highest 50° 32. Nor does the average descend as the observer
moves northward, or to the vicinity, or into the interior of the Highlands ; for the mean
temperature of Dumfries, deduced from the observation of 9 years, is 42° 327 ; that of
Glasgow, as determined by Professor Thomson, is 47° 75 ; that of Edinburgh, as deter-
mined by Professor Playfair, is 47° 7 ; that of St. Andrews, deduced from the observa-
tion of 8 years, 48° 01 ; that of Perth, deduced from the observation of 9 years, is
48° 131 ; that of Aberdeen, deduced from the observation of 10 years, 47° 648 ; and
that of Inverness, deduced from the observation of 13 years, 48° 09. The range of the
barometer is often both great and rapid, and averages throughout the mainland, 2'82
inches, or from 36'92 to 28'10. Snow is less copious, though probably more frequent,
in its falls than in the south of England ; and rain, on the average, is less than in the
west of England. The joint quantity of the two has an annual mean amount for tho
kingdom of from 30 to 31 inches, but differs widely on the east and on the west coast,
— varying, on the former, from 22 to 26 inches, and, on the latter, from 35 to 46 inches.
At Dumfries, the mean annual quantity, as deduced from the observation of 7 years, is
33'54 inches ; at Glasgow, from the observation of 31 years, 224 inches ; at Perth, from
the observation of 9 years, 23'01 inches ; at Aberdeen, from the observation of 4 years,
27'37 inches ; and at Inverness, from the observation of 7 years, 26'21. The average
number of days in the year on which rain or snow ialls, is variously stated to be, on the
east coast, 135 and about 145, and on the west coast, 205 and 200. The least humid
district in the Lowlands, is East- Lothian ; and the most humid, Ayrshire. Thick fogs,
and small drizzly rains, visit the whole country, chiefly in spring and autumn, and
during the prevalence of easterly winds ; and, in many localities, the fogs lie along a
champaign country like seas of fleecy vapour, with the hills and loftier uplands appear-
ing like islands on their bosom. Snow, except in the milder districts of the Lowlands,
generally begins to fall about the middle of November, and seldom ceases its periodical
visits till March or April. The winds are to a high degree variable, both in force and
direction ; and, in the Highlands and Southern Highlands, produce not a few curious
phenomena in connexion with the peculiar configuration of localities. They often rise
to gale and storm, and in some places even to tempest ; and, about the period of the
equinoxes, are more violent than in England. Those from the west are, in autumn and
the early part of winter, the most prevalent, and, in general, they are the highest ; and
those from the north-east prevail from the beginning of March till May or June, and are
often keen and severe. At St. Andrews, the winds are westerly, except in the spring
and early summer months, when those which are easterly prevail ; at Perth, during 9
years ending with 1833, the winds were from the west and north-west, on 1,197 days,
from the east and south-east, on 996, from the south and south-west, on 957, and from
the north and north-east, on 137 ; and at Inverness, as the result of 13,800 observations,
made during 21 years preceding 1825, the proportions of the winds in parts of 1,000, were
westerly and south-westerly, 478, easterly and north-easterly, 237, northerly and north-
westerly, 205, and southerly and south-easterly, 80. These instances, however, indicate