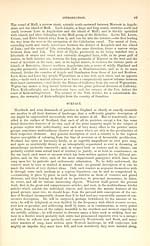 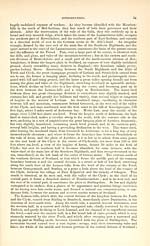 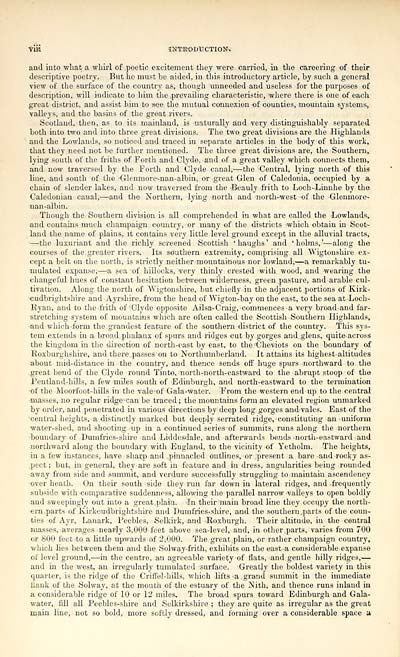 VU1 -INTRODUCTION.
and into what a whirl of poetic excitement they were carried, in the careering of their
descriptive poetry. But he must be aided, in this introductory article, by such a general
view of the surface of the country as, though unneeded and useless for the purposes of
description, will indicate to him the .prevailing characteristic, where there is one of each
great district, and assist him to see the mutual connexion of counties, mountain systems^
valleys, and the basins of the great rivers.
Scotland, then, as to its mainland, is naturally and very distinguishably separated
both into two and into three great divisions. The two great divisions are the Highlands
and the Lowlands, so noticed and traced in separate articles in the body of this work,
that they need not be further mentioned. The three great divisions are, the Southern,
lying south of the friths of Forth and Clyde, and of a great valley which connects them,
and now traversed by the Forth and Clyde canal, 1 — the Central, lying north of this
line, and south of the Gleuniore-nan-albin, or great Glen of Caledonia, occupied by a
chain of slender lakes, and now traversed from the -Beauly frith to Loch-Linnhe by the
Caledonian caaal, — and the Northern, lying north and north-west of the •Glenmore--
nan-albin.
Though the Southern division is all comprehended in what are called the Lowlands,
and contains much champaign country, -or many of the districts which obtain in Scot-
land the name of plains, it contains yery little level, ground except in the alluvial tracts,
• — the luxuriant and the richly screened Scottish 'haughs' and 'holms,' — along the
courses of the greater rivers. Its southern extremity, comprising all Wigtonshire ex-
cept a belt on the north, is strictly neither mountainous nor lowland;- — a remarkably tu-
inulated expanse, — a sea of hillocks, very thinly crested with wood, and wearing the
changeful hues of constant hesitation between wilderness, green ^pasture, and arable cul-
tivation. Along the north of Wigtonshire, but chiefly -in the adjacent portions of Kirk-
cudbrightshire and Ayrshire, from the head of Wigton-baj 7 on the east, to the sea at -Loch-
Ryan, and to the frith of 'Clyde opposite Ailsa- Craig, 'Commences a very broad and far-
stretching System of mountains which are often called the Scottish Southern Highlands,
•and whichform the. grandest feature of the southern district of the country. This sys-
tem extends in a broad phalanx of spurs and ridges cut by gorges and. glens, quite-across
the kingdom in the direction of north-east by east, to the -Cheviots on the boundary of
Roxburghshire, and there ..passeson to Northumberland. It attains its highest altitudes
about mid-distance in the country, and thence sends off huge spurs northward to the
great bend of the Clyde round Tinto, north-north-eastward to the abrupt stoop of the
Pentlaud-hills, a few miles south of Edinburgh, and north-eastward to the termination
of the Moorfoot-hills in the valeof Gala-water. From the western end up to the central
-masses, no regular ridge-can be traced ; the mountains form an elevated region unmarked
by order, and penetrated in various directions by deep long gorges and-vales. East of the
central heights, a distinctly marked but deeply serrated ridge, constituting an -uniform
water-shed, and shooting up in a continued series of summits, runs along the northern
■boundary of Dumfries-shire and Liddesdale, and afterwards bends -north-eastward and
northward along the boundary with England, to the vicinity of Yetholm. The heights,
•in a few instances, have sharp and pinnacled outlines, or .present a bare and roGky as-
.pect ; but, in general, they are soft in feature and in dress, angularities being rounded
away from side and summit, and verdure successfully struggling to maintain ascendency
over heath. On their south side they run far down in lateral ridges, and frequently
subside with -comparative suddenness, allowing the parallel narrow valleys to open boldly
and sweepingly out into a great ..plain. In their main broad line they ocoupy the north-
ern .parts of Kirkcudbrightshire and Dumfries-shire, and the southern, parts of the coun-
ties of Ayr, Lanark, Peebles, Selkirk, and Roxburgh. Their altitude, in the central
masses, averages nearly 3,000 feet above sea-level, and, in other, parts, varies from 700
or S00 feet 'to a little upwards of 2,000. The great-plain, or rather champaign country,
which lies between them and the Solway-frith, exhibits on the easta considerable expanse
of level ground, — in the centre, an agreeable variety of flats, and. gentle hilly ridges, —
and in the west, an irregularly tumulated surface. Greatly the boldest variety in this
quarter, is the ridge of the Criffel-hills, which lifts a .grand summit in the immediate
flank of the Solway, at the mouth of the estuary of the Nith, and thence runs inland in
a considerable ridge of 10 or 12 miles. The broad spurs toward Edinburgh and Gala-
water, fill all Peebles-shire and Selkirkshire ; they are quite as irregular as the great
main line, not so bold, more softly dressed, and forming over a considerable space a