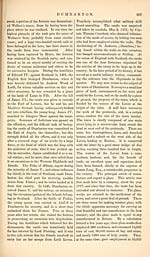 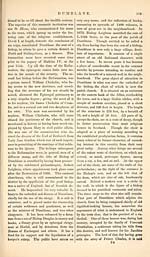 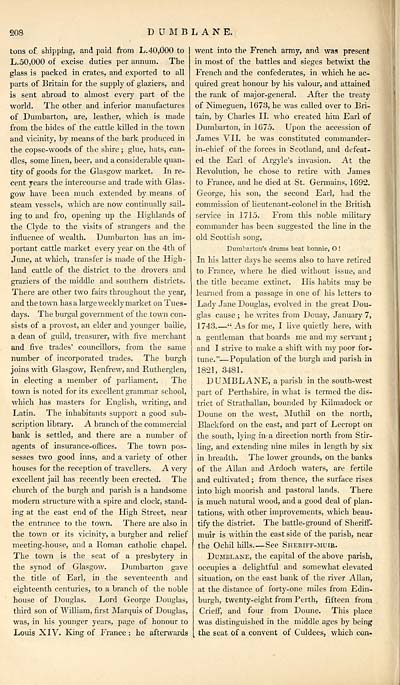 208
D U M B L A N" E.
tons of. shipping, and paid from L. 40,000 to
L. 50,000 of excise duties per annum. The
glass is packed in crates, and exported to all
parts of Britain for the supply of glaziers, and
is sent abroad to almost every part of the
world. The other and inferior manufactures
of Dumbarton, are, leather, which is made
from the hides of the cattle killed in the town
and vicinity, by means of the bark produced in
the copse- woods of the shire; glue, hats, can-
dles, some linen, beer, and a considerable quan-
tity of goods for the Glasgow market. In re-
cent years the intercourse and trade with Glas-
gow have been much extended by means of
steam vessels, which are now continually sail-
ing to and fro, opening up the Highlands of
the Clyde to the visits of strangers and the
influence of wealth. Dumbarton has an im-
portant cattle market every year on the 4th of
June, at which, transfer is made of the High-
land cattle of the district to the drovers and
graziers of the middle and southern districts.
There are other two fairs throughout the year,
and the town has a large weekly market on Tues-
days. The burgal government of the town con-
sists of a provost, an elder and younger bailie,
a dean of guild, treasurer, with five merchant
and five trades' councillors, from the same
number of incorporated trades. The burgh
joins with Glasgow, Renfrew, and Rutherglen,
in electing a member of parliament. The
town is noted for its excellent grammar school,
which has masters for English, writing, and
Latin. The inhabitants support a good sub-
scription library. A branch of the commercial
bank is settled, and there are a number of
agents of insurance-offices. The town pos-
sesses two good inns, and a variety of other
houses for the reception of travellers. A very
excellent jail has recently been erected. The
church of the burgh and parish is a handsome
modem structure with a spire and clock, stand-
ing at the east end of the High Street, near
the entrance to the town. There are also in
the town or its vicinity, a burgher and relief
meeting-house, and a Roman catholic chapel.
The town is the seat of a presbytery in
the synod of Glasgow. Dumbarton gave
the title of Earl, in the seventeenth and
eighteenth centuries, to a branch of the noble
house of Douglas. Lord George Douglas,
third son of William, first Marquis of Douglas,
was, in his younger years, page of honour to
Louis XIV. King of France : he afterwards
went into the French army, and was present
in most of the battles and sieges betwixt the
French and the confederates, in which he ac-
quired great honour by his valour, and attained
the rank of major-general. After the treaty
of Nimeguen, 1673, he was called over to Bri-
tain, by Charles II. who created him Earl of
Dumbarton, in 1675. Upon the accession of
James VII. he was constituted commander-
in-chief of the forces in Scotland, and defeat-
ed the Earl of Argyle's invasion. At the
Revolution, he chose to retire with James
to France, and he died at St. Germains, 1692.
George, his son, the second Earl, had the
commission of lieutenant-colonel in the British
service in 1715. From this noble military
commander has been suggested the line in the
old Scottish song,
Dumbarton's drums beat bonnie, O 1
In his latter days he seems also to have retired
to France, where he died without issue, and
the title became extinct. His habits may be
learned from a passage in one of his letters to
Lady Jane Douglas, evolved in the great Dou-
glas cause ; he writes from Douay, January 7,
1743. — " As for me, I live quietly here, with
a gentleman that boards me and my servant ;
and I strive to make a shift with my poor for-
tune." — Population of the burgh and parish in
1821, 3481.
DUMBLANE, a parish in the south-west
part of Perthshire, in what is termed the dis-
trict of Strathallan, bounded by Kilmadock or
Doune on the west, Muthil on the north,
Blackford on the east, and part of Lecropt on
the south, lying in- a direction north from Stir-
ling, and extending nine miles in length by six
in breadth. The lower grounds, on the banks
of the Allan and Ardoch waters, are fertile
and cultivated ; from thence, the surface rises
into high moorish and pastoral lands. There
is much natural wood, and a good deal of plan-
tations, with other improvements, which beau-
tify the district. The battle-ground of Sheriff-
muir is within the east side of the parish, near
the Ochil hills See Sheriff-muir.
Dumblane, the capital of the above parish,
occupies a delightful and somewhat elevated
situation, on the east bank of the river Allan,
at the distance of forty-one miles from Edin-
burgh, twenty-eight from Perth, fifteen from
Crieff, and four from Doune. This place
was distinguished in the middle ages by being
the seat of a convent of Culdees, which con-