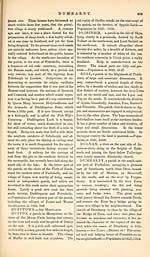 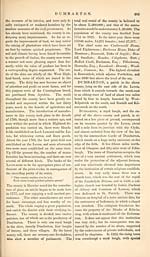 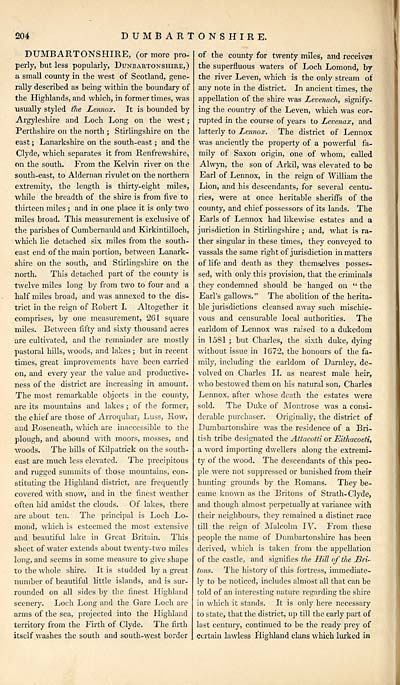 204
DUMBARTONSHIRE.
DUMBARTONSHIRE, (or more pro-
perly, but less popularly, Dunbartonshire,)
a small county in the west of Scotland, gene-
rally described as being within the boundary of
the Highlands, and which, in former times, was
usually styled the Lennox. It is bounded by
Argyllshire and Loch Long on the west ;
Perthshire on the north ; Stirlingshire on the
east ; Lanarkshire on the south-east ; and the
Clyde, which separates it from Renfrewshire,
on the south. From the Kelvin river on the
south-east, to Aldernan rivulet on the northern
extremity, the length is thirty-eight miles,
while the breadth of the shire is from five to
thirteen miles ; and in one place it is only two
miles broad. This measurement is exclusive of
the parishes of Cumbernauld and Kirkintilloch,
which lie detached six miles from the south-
east end of the main portion, between Lanark-
shire on the south, and Stirlingshire on the
north. This detached part of the county is
twelve miles long by from two to four and a
half miles broad, and was annexed to the dis-
trict in the reign of Robert I. Altogether it
comprises, by one measurement, 26 1 square
miles. Between fifty and sixty thousand acres
are cultivated, and the remainder are mostly
pastoral hills, woods, and lakes ; but in recent
times, great improvements have been carried
on, and every year the value and productive-
ness of the district are increasing in amount.
The most remarkable objects in the county,
are its mountains and lakes ; of the former,
the chief are those of Arroquhar, Luss, Row,
and Roseneath, which are inaccessible to the
plough, and abound with moors, mosses, and
woods. The hills of Kilpatrick on the south-
east are much less elevated. The precipitous
and rugged summits of those mountains, con-
stituting the Highland district, are frequently
covered with snow, and in the finest weather
often hid amidst the clouds. Of lakes, there
are about ten. The principal is Loch Lo-
mond, which is esteemed the most extensive
and beautiful lake in Great Britain. This
sheet of water extends about twenty-two miles
long, and seems in some measure to give shape
to the whole shire. It is studded by a great
number of beautiful little islands, and is sur-
rounded on all sides by the finest Highland
scenery. Loch Long and the Gare Loch are
arms of the sea, projected into the Highland
territory from the Firth of Clyde. The firth
itself washes the south and south-west border
of the county for twenty miles, and receives
the superfluous waters of Loch Lomond, by
the river Leven, which is the only stream of
any note in the district. In ancient times, the
appellation of the shire was Levenach, signify-
ing the country of the Leven, which was cor-
rupted in the course of years to Levenax, and
latterly to Lennox. The district of Lennox
was anciently the property of a powerful fa-
mily of Saxon origin, one of whom, called
Alwyn, the son of Arkil, was elevated to be
Earl of Lennox, in the reign of William the
Lion, and his descendants, for several centu-
ries, were at once heritable sheriffs of the
county, and chief possessors of its lands. The
Earls of Lennox had likewise estates and a
jurisdiction in Stirlingshire ; and, what is ra-
ther singular in these times, they conveyed to
vassals the same right of jurisdiction in matters
of life and death as they themselves posses-
sed, with only this provision, that the criminals
they condemned should be hanged on "the
Earl's gallows." The abolition of the herita-
ble jurisdictions cleansed away such mischie-
vous and censurable local authorities. The
earldom of Lennox was raised to a dukedom
in 1581 ; but Charles, the sixth duke, dying
without issue in 1672, the honours of the fa-
mily, including the earldom of Darnley, de-
volved on Charles II. as nearest male heir,
who bestowed them on his natural son, Charles
Lennox, after whose death the estates were
sold. The Duke of Montrose was a consi-
derable purchaser. Originally, the district of
Dumbartonshire was the residence of a Bri-
tish tribe designated the Attacotti or Eithacoeti,
a word importing dwellers along the extremi-
ty of the wood. The descendants of this peo-
ple were not suppressed or banished from their
hunting grounds by the Romans. They be-
came known as the Britons of Strath- Clyde,
and though almost perpetually at variance -with
their neighbours, they remained a distinct race
till the reign of Malcolm IV. From these
people the name of Dumbartonshire has been
derived, which is taken from the appellation
of the castle, and signifies the Hill of the Sri-
tons. The history of this fortress, immediate-
ly to be noticed, includes almost all that can be
told of an interesting nature regarding the shire
in which it stands. It is only here necessary
to state, that the district, up till the early part of
last century, continued to be the ready prey of
certain lawless Highland clans which lurked in