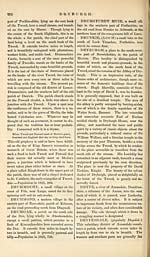 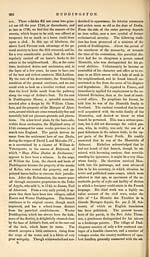 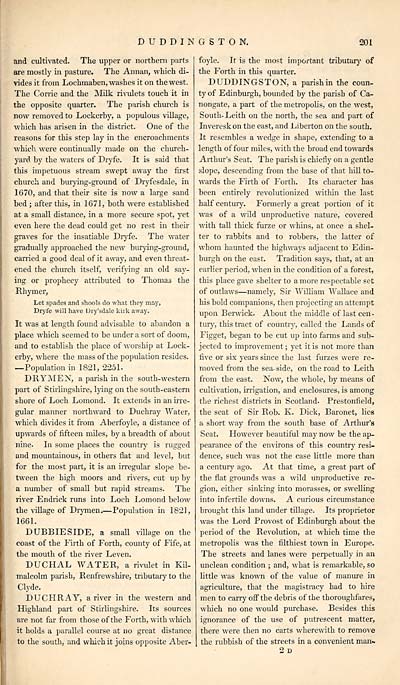 DUDDINGSTON.
201
and cultivated. The upper or northern parts
are mostly in pasture. The Annan, which di-
vides it from Lochmaben, washes it on the west.
The Corrie and the Milk rivulets touch it in
the opposite quarter. The parish church is
now removed to Lockerby, a populous village,
which has arisen in the district. One of the
reasons for this step lay in the encroachments
which were continually made on the church-
yard by the waters of Dryfe. It is said that
this impetuous stream swept away the first
church and burying-ground of Dryfesdale, in
1670, and that their site is now a large sand
bed ; after this, in 1671, both were established
at a small distance, in a more secure spot, yet
even here the dead could get no rest in their
graves for the insatiable Dryfe. The water
gradually approached the new burying-ground,
carried a good deal of it away, and even threat-
ened the church itself, verifying an old say-
ing or prophecy attributed to Thomas the
Rhymer,
Let spades and shools do what they may,
Dryfe will have IJry'sdale kirk away.
It was at length found advisable to abandon a
place which seemed to be under a sort of doom,
and to establish the place of worship at Lock-
erby, where the mass of the population resides.
—Population in 1821, 2231.
DRYMEN, a parish in the south-western
part of Stirlingshire, lying on the south-eastern
shore of Loch Lomond. It extends in an irre-
gular manner northward to Duchray Water,
which divides it from Aberfoyle, a distance of
upwards of fifteen miles, by a breadth of about
nine. In some places the country is rugged
and mountainous, in others flat and level, but
for the most part, it is an irregidar slope be-
tween the bigh moors and rivers, cut up by
a number of small but rapid streams. The
river Endrick runs into Loch Lomond below
the village of Drymen. — Population in 1821,
1661.
DUBBIESIDE, a small village on the
coast of the Firth of Forth, county of Fife, at
the mouth of the river Leven.
DUCHAL WATER, a rivulet in Kil-
malcolm paiish, Renfrewshire, tributary to the
Clyde.
DUCHRAY, a river in the western and
Highland part of Stirlingshire. Its sources
are not far from those of the Forth, with which
it holds a parallel course at no great distance
to the south, and which it joins opposite Aber-
foyle. It is the most important tributary of
the Forth in this quarter.
DUDDINGSTON, a parishin the coun-
ty of Edinburgh, bounded by the parish of Ca-
nongate, a part of the metropolis, on the west,
South- Leith on the north, the sea and part of
Invereskon the east, and Liberton on the south.
It resembles a wedge in shape, extending to a
length of four miles, with the broad end towards
Arthur's Seat. The parish is chiefly on a gentle
slope, descending from the base of that hill to-
wards the Firth of Forth. Its character has
been entirely revolutionized within the last
half century. Formerly a great portion of it
was of a wild unproductive nature, covered
with tall thick furze or whins, at once a shel-
ter to rabbits and to robbers, the latter of
whom haunted the highways adjacent to Edin-
burgh on the east. Tradition says, that, at an
earlier period, when in the condition of a forest,
this place gave shelter to a more respectable set
of outlaws — namely, Sir William Wallace and
his bold companions, then projecting an attempt
upon Berwick. About the middle of last cen-
tury, this tract of country, called the Lands of
Figget, began to be cut up into farms and sub-
jected to improvement; yet it is not more than
five or six years since the last furzes were re-
moved from the sea- side, on the road to Leith
from the east. Now, the whole, by means of
cidtivation, irrigation, and enclosures, is among
the richest districts in Scotland- Prestonfield,
the seat of Sir Rob. K. Dick, Baronet, lies
a short way from the south base of Arthur's
Seat. However beautiful may now be the ap-
pearance of the environs of this country resi-
dence, such was not the case little more than
a century ago. At that time, a great part of
the flat grounds was a wild unproductive re-
gion, either sinking into morasses, or swelling
into infertile downs. A curious circumstance
brought this land under tillage. Its proprietor
was the Lord Provost of Edinburgh about the
period of the Revolution, at which time the
metropolis was the filthiest town in Europe.
The streets and lanes were perpetually in an
unclean condition ; and, what is remarkable, so
little was known of the value of manure in
agriculture, that the magistracy had to hire
men to carry off the debris of the thoroughfares,
which no one would purchase. Besides this
ignorance of the use of putrescent matter,
there were then no carts wherewith to remove
the rubbish of the streets in a convenient man-
2d