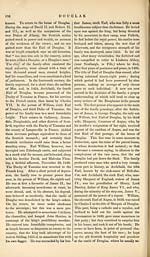 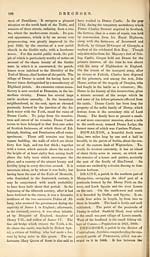 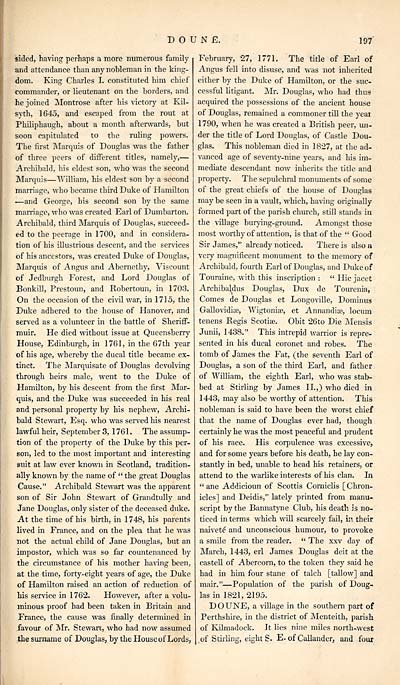 D O U N fi.
197
sided, having perhaps a more numerous family
and attendance than any nobleman in the king-
dom. King Charles I. constituted him chief
commander, or lieutenant on the borders, and
he joined Montrose after his victory at Kil-
syth, 1645, and escaped from the rout at
Philiphaugh, about a month afterwards, but
soon capitulated to the ruling powers.
The first Marquis of Douglas was the father
of three peers of different titles, namely, —
Archibald, his eldest son, who was the second
Marquis — William, his eldest son by a second
marriage, who became third Duke of Hamilton
— and George, bis second son by the same
marriage, who was created Earl of Dumbarton.
Archibald, third Marquis of Douglas, succeed-
ed to the peerage in 1700, and in considera-
tion of his illustrious descent, and the sendees
of his ancestors, was created Duke of Douglas,
Marquis of Angus and Abernethy, Viscount
of Jedburgh Forest, and Lord Douglas of
Bonkill, Prestoun, and Robertoun, in 170-'}.
On the occasion of the civil war, in 1715, the
Duke adhered to the house of Hanover, and
served as a volunteer in the battle of Sheriff-
muir. He died without issue at Queensberry
House, Edinburgh, in 1761, in the 67th year
of his age, whereby the ducal title became ex-
tinct. The Marquisate of Douglas devolving
through heirs male, went to the Duke of
Hamilton, by his descent from the first Mar-
quis, and the Duke was succeeded in his real
and personal property by his nephew, Archi-
bald Stewart, Esq. who was served his nearest
lawful heir, September 3, 1761. The assump-
tion of the property of the Duke by this per-
son, led to the most important and interesting
suit at law ever known in Scotland, tradition-
ally known by the name of " the great Douglas
Cause." Archibald Stewart was the apparent
son of Sir John Stewart of Grandtully and
Jane Douglas, only sister of the deceased duke.
At the time of his birth, in 1748, his parents
lived in France, and on the plea that he was
not the actual child of Jane Douglas, but an
impostor, which was so far countenanced by
the circumstance of his mother having been,
at the time, forty-eight years of age, the Duke
of Hamilton raised an action of reduction of
Iris service in 1762. However, after a volu-
minous proof had been taken in Britain and
France, the cause was finally determined in
favour of Mr. Stewart, who had now assumed
the surname of Douglas, by the House of Lords,
February, 27, 1771. The title of Earl of
Angus fell into disuse, and was not inherited
either by the Duke of Hamilton, or the suc-
cessful litigant. Mr. Douglas, who had thus
acquired the possessions of the ancient house
of Douglas, remained a commoner till the yeai
1790, when he was created a British peer, un-
der the title of Lord Douglas, of Castle Dou-
glas. This nobleman died in 1827, at the ad-
vanced age of seventy-nine years, and his im-
mediate descendant now inherits the title and
property. The sepulchral monuments of some
of the great chiefs of the house of Douglas
may be seen in a vault, which, having originally
formed part of the parish church, still stands in
the village burying-ground. Amongst those
most worthy of attention, is that of the " Good
Sir James," already noticed. There is also a
very magnificent monument to the memory of
Archibald, fourth Earl of Douglas, and Duke of
Touraine, with this inscription : " Hie jacet
Archibaldus Douglas, Dux de Tourenia,
Comes de Douglas et Longoville, Dominus
Gallovidise, Wigtonia?, et Annandite, locum
tenens Regis Scotiee. Obit 26to Die Mensis
Junii, 1438." This intrepid warrior is repre-
sented in his ducal coronet and robes. The
tomb of James the Fat, (the seventh Earl of
Douglas, a son of the third Earl, and father
of William, the eighth Earl, who was stab-
bed at Stirling by James II.,) who died in
1443, may also be worthy of attention. This
nobleman is said to have been the worst chief
that the name of Douglas ever had, though
certainly he was the most peaceful and prudent
of his race. His corpulence was excessive,
and for some years before his death, he lay con-
stantly in bed, unable to head his retainers, or
attend to the warlike interests of his clan. In
" ane Addicioun of Scottis Corniclis [ Chron-
icles] and Deidis," lately printed from manu-
script by the Bannatyne Club, his death is no-
ticed in terms which will scarcely fail, in their
naivete and unconscious humour, to provoke
a smile from the reader. " The xxv day of
March, 1443, erl James Douglas deit at the
castell of Abercorn, to the token they said he
had in him four stane of talch [tallow] and
mair." — Population of the parish of Doug-
las in 1821, 2195.
DOUNE, a village in the southern part of
Perthshire, in the district of Menteith, parish
of Kilmadock. It lies nine miles north-west
of Stirling, eight S. E. of Callander, and four