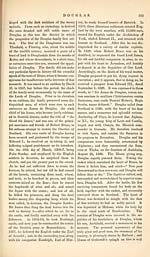 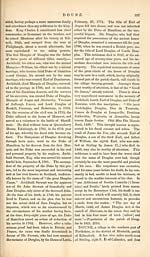 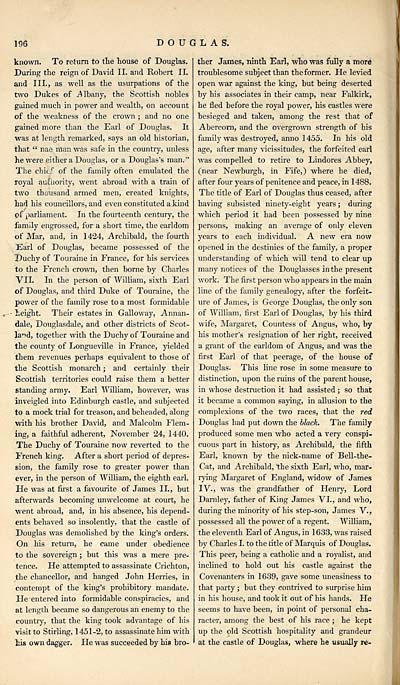 196
DOUGLAS.
known. To return to the house of Douglas.
During the reign of David II. and Robert II.
and III., as well as the usurpations of the
two Dukes of .Albany, the Scottish nobles
gained much in power and wealth, on account
of the weakness of the crown ; and no one
gained more than the Earl of Douglas. It
was at length remarked, says an old historian,
that " nae man was safe in the country, unless
he were either a Douglas, or a Douglas's man."
The chit .f of the family often emulated the
royal authority, went abroad with a train of
two thousand armed men, created knights,
had his councillors, and even constituted a kind
of parliament. In the fourteenth century, the
family engrossed, for a short time, the earldom
of Mar, and, in 1424, Archibald, the fourth
Earl of Douglas, became possessed of the
J)uchy of Touraine in France, for his sendees
to the French crown, then borne by Charles
VII. In the person of William, sixth Earl
of Douglas, and third Duke of Touraine, the
power of the family rose to a most formidable
■ height. Their estates in Galloway, Annan-
dale, Douglasdale, and other districts of Scot-
land, together with the Duchy of Touraine and
the county of Longueville in France, yielded
them revenues perhaps equivalent to those of
the Scottish monarch ; and certainly their
Scottish territories could raise them a better
standing army, Earl William, however, was
inveigled into Edinburgh castle, and subjected
to a mock trial for treason, and beheaded, along
with his brother David, and Malcolm Flem-
ing, a faithful adherent, November 24, 1440.
The Duchy of Touraine now reverted to the
French king. After a short period of depres-
sion, the family rose to greater power than
ever, in the person of William, the eighth earl.
He was at first a favourite of James II., but
afterwards becoming unwelcome at court, he
went abroad, and, in his absence, his depend-
ents behaved so insolently, that the castle of
Douglas was demolished by the king's orders.
On his return, he came under obedience
to the sovereign ; but this was a mere pre-
tence. He attempted to assassinate Crichton,
the chancellor, and hanged John Hemes, in
contempt of the king's prohibitory mandate.
He entered into formidable conspiracies, and
at length became so dangerous an enemy to the
country, that the king took advantage of his
visit to Stirling, 1451-2, to assassinate him with
his own dagger. He was succeeded by his bro-
ther James, ninth Earl, who was fully a more
troublesome subject than theformer. He levied
open war against the king, but being deserted
by his associates in their camp, near Falkirk,
he fled before the royal power, his castles were
besieged and taken, among the rest that of
Abercorn, and the overgrown strength of his
family was destroyed, anno 1455. In his old
age, after many vicissitudes, the forfeited earl
was compelled to retire to Lindores Abbey,
(near Newburgh, in Fife,) where he died,
after four years of penitence and peace, in 1488.
The title of Earl of Douglas thus ceased, after
having subsisted ninety-eight years ; during
which period it had been possessed by nine
persons, making an average of only eleven
years to each individual. A new era now
opened in the destinies of the family, a proper
understanding of which will tend to clear up
many notices of the Douglasses in the present
work. The first person who appears in the main
line of the family genealogy, after the forfeit-
ure of James, is George Douglas, the only son
of William, first Earl of Douglas, by his third
wife, Margaret, Countess of Angus, who, by
his mother's resignation of her right, received
a grant of the earldom of Angus, and was the
first Earl of that peerage, of the house of
Douglas. This line rose in some measure to
distinction, upon the ruins of the parent house,
in whose destruction it had assisted ; so that
it became a common saying, in allusion to the
complexions of the two races, that the red
Douglas had put down the black. The family
produced some men who acted a very conspi-
cuous part in history, as Archibald, the fifth
Earl, known by the nick-name of Bell-the-
Cat, and Archibald, the sixth Earl, who, mar-
rying Margaret of England, widow of James
IV., was the grandfather of Henry, Lord
Darnley, father of King James VI., and who,
during the minority of his step-son, James V.,
possessed all the power of a regent. William,
the eleventh Earl of Angus, in 1 633, was raised
by Charles I. to the title of Marquis of Douglas.
This peer, being a catholic and a royalist, and
inclined to hold out his castle against the
Covenanters in 1639, gave some uneasiness to
that party ; but they contrived to surprise him
in his house, and took it out of his hands. He
seems to have been, in point of personal cha-
racter, among the best of his race ; he kept
up the old Scottish hospitality and grandeur
at the castle of Douglas, where he usually re-