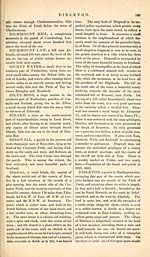 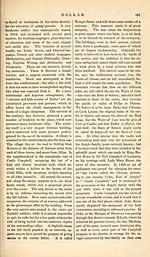 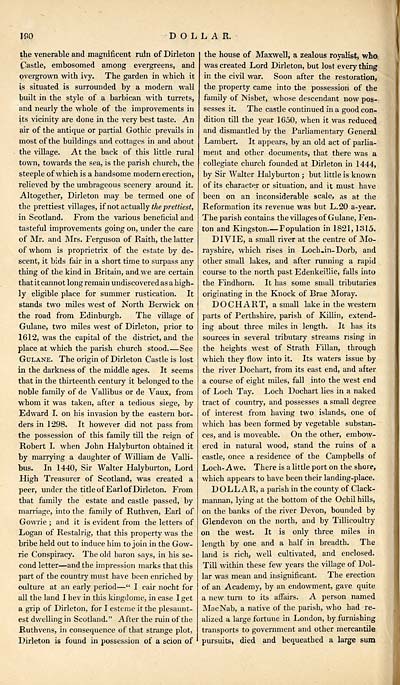 ISO
DOLLAR.
the venerable and magnificent ruin of Dirleton
Castle, embosomed among evergreens, and
overgrown with ivy. The garden in which it
is situated is surrounded by a modern wall
built in the style of a barbican with turrets,
and nearly the whole of the improvements in
its vicinity are done in the very best taste. An
air of the antique or partial Gothic prevails in
most of the buildings and cottages in and about
the village. At the back of this little rural
town, towards the sea, is the parish church, the
steeple of which is a handsome modern erection,
relieved by the umbrageous scenery around it.
Altogether, Dirleton may be termed one of
the prettiest villages, if not actually the prettiest,
in Scotland. From the various beneficial and
tasteful improvements going on, under the care
of Mr. and Mrs. Ferguson of Raith, the latter
of whom is proprietrix of the estate by de-
scent, it bids fair in a short time to surpass any
thing of the kind in Britain, and we are certain
that it cannot long remain undiscovered as a high-
ly eligible place for summer rustication. It
stands two miles west of North Berwick on
the road from Edinburgh. The village of
Gulane, two miles west of Dirleton, prior to
1612, was the capital of the district, and the
place at which the parish church stood See
Gulane. The origin of Dirleton Castle is lost
in the darkness of the middle ages. It seems
that in the thirteenth century it belonged to the
noble family of de Vallibus or de Vaux, from
whom it was taken, after a tedious siege, by
Edward I. on his invasion by the eastern bor-
ders in 1298. It however did not pass from
the possession of this family till the reign of
Robert I. when John Halyburton obtained it
by marrying a daughter of William de Valli-
bus. In 1440, Sir Walter Halyburton, Lord
High Treasurer of Scotland, was created a
peer, under the title of Earlof Dirleton. From
that family the estate and castle passed, by
marriage, into the family of Ruthven, Earl of
Gowrie ; and it is evident from the letters of
Logan of Restalrig, that this property was the
bribe held out to induce him to join in the Gow-
rie Conspiracy. The old baron says, in his se-
cond letter — and the impression marks that this
part of the country must have been enriched by
culture at an early period — " I cair nocht for
all the land I hev in this kingdome, in case I get
a grip of Dirleton, for I esteme it the plesaunt-
est dwelling in Scotland. " After the ruin of the
Ruthvens, in consequence of that strange plot,
Dirleton is found in possession of a scion of
the house of Maxwell, a zealous royalist, who,
was created Lord Dirleton, but lost every thing
in the civil war. Soon after the restoration,
the property came into the possession of the
family of Msbet, whose descendant now pos-
sesses it. The castle continued in a good con-
dition till the year 1650, when it was reduced
and dismantled by the Parliamentary General
Lambert. It appears, by an old act of parlia-
ment and other documents, that there was a
collegiate chinch founded at Dirleton in 1444,
by Sir Walter Halyburton ; but little is known
of its character or situation, and it must have
been on an inconsiderable scale, as at the
Reformation its revenue was but L.20 a-year.
The parish contains the villages of Gulane, Fen-
ton and Kingston — Population in 1821, 1315.
DIVIE, a small river at the centre of Mo-
rayshire, which rises in Loch-in-Dorb, and
other small lakes, and after running a rapid
course to the north past Edenkeillie, falls into
the Findhorn. It has some small tributaries
originating in the Knock of Brae Moray.
DO CHART, a small lake in the western
parts of Perthshire, parish of Killin, extend-
ing about three miles in length. It has its
sources in several tributary streams rising in
the heights west of Strath Fillan, through
which they flow into it. Its waters issue by
the river Dochart, from its east end, and after
a course of eight miles, fall into the west end
of Loch Tay. Loch Dochart lies in a naked
tract of country, and possesses a small degree
of interest from having two islands, one of
which has been formed by vegetable substan-
ces, and is moveable. On the other, embow-
ered in natural wood, stand the ruins of a
castle, once a residence of the Campbells of
Loch- Awe. There is a little port on the shore,
which appears to have been their landing-place.
DOLLAR, a parish in the county of Clack-
mannan, lying at the bottom of the Ochil hills,
on the banks of the river Devon, bounded by
Glendevon on the north, and by Tillicoultry
on the west. It is only three miles in
length by one and a half in breadth. The
land is rich, well cultivated, and enclosed.
Till within these few years the village of Dol-
lar was mean and insignificant. The erection
of an Academy, by an endowment, gave quite
a new turn to its affairs. A person named
MacNab, a native of the parish, who had re-
alized a large fortune in London, by furnishing
transports to government and other mercantile
pursuits, died and bequeathed a large sum