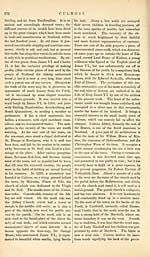 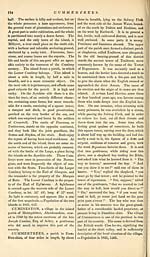 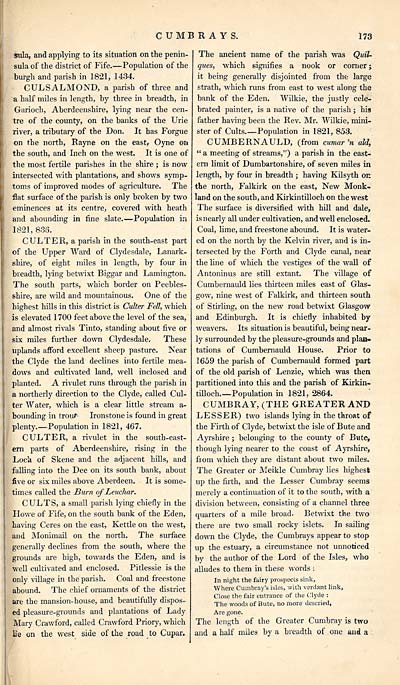 CUMBRAYS.
173
sula, and applying to its situation on the penin-
sula of the district of Fife. — Population of the
burgh and parish in 1821, 1434.
CULS ALMOND, a parish of three and
a half miles in length, by three in breadth, in
Garioch, Aberdeenshire, lying near the cen-
tre of the county, on the banks of the Urie
river, a tributary of the Don. It has Forgue
on the north, Rayne on the east? Oyne on
the south, and Inch on the west. It is one of
the most fertile parishes in the shire ; is now
intersected with plantations, and shows symp-
toms of improved modes of agriculture. The
flat surface of the parish is only broken by two
eminences at its centre, covered with heath
and abounding in fine slate. — Population in
1821, 838.
CULTER, a parish in the south-east part
of the Upper Ward of Clydesdale, Lanark-
shire, of eight miles in length, by four in
breadth, lying betwixt Biggar and Lamington.
The south parts, which border on Peebles-
shire, are wild and mountainous. One of the
highest hills in this district is Culter Fell, which
is elevated 1700 feet above the level of the sea,
and almost rivals Tinto, standing about five or
six miles further down Clydesdale. These
uplands afford excellent sheep pasture. Near
the Clyde the land declines into fertile mea-
dows and cultivated land, well inclosed and
planted. A rivulet runs through the parish in
a northerly direction to the Clyde, called Cul-
ter Water, which is a clear little stream a-
bounding in trouf- Ironstone is found in great
plenty. — Population in 1821, 467.
CULTER, a rivulet in the south-east-
ern parts of Aberdeenshire, rising in the
Loch of Skene and the adjacent hills, and
falling into the Dee on its south bank, about
five or six miles above Aberdeen. It is some-
times called the Burn ofLeuchar.
CULTS, a small parish lying chiefly in the
Howe of Fife, on the south bank of the Eden,
having Ceres on the east, Kettle on the west,
and Monimail on the north. The surface
generally declines from the south, where the
grounds are high, towards the Eden, and is
well cultivated and enclosed. Pitlessie is the
only village in the parish. Coal and freestone
abound. The chief ornaments of the district
are the mansion-house, and beautifully dispos-
ed pleasure-grounds and plantations of Lady
Mary Crawford, called Crawford Priory, which
be on the west side of the road to Cupar.
The ancient name of the parish was QuiU
ques, which signifies a nook or corner ;
it being generally disjointed from the large
strath, which runs from east to west along the
bank of the Eden. Wilkie, the justly cele-
brated painter, is a native of the parish ; his
father having been the Rev. Mr. Wilkie, mini-
ster of Cults Population in 1821, 853.
CUMBERNAULD, (from cumar '« aid,
" a meeting of streams,") a parish in the east-
ern limit of Dumbartonshire, of seven miles in
length, by four in breadth ; having Kilsyth on
the north, Falkirk on the east, New Monk-
land on the south, and Kirkintilloch on the west
The surface is diversified with hill and dale,
is nearly all under cultivation, and well enclosed.
Coal, lime, and freestone abound. It is water-
ed on the north by the Kelvin river, and is in-
tersected by the Forth and Clyde canal, near
the line of which the vestiges of the wall of
Antoninus are still extant. The village of
Cumbernauld lies thirteen miles east of Glas-
gow, nine west of Falkirk, and thirteen south
of Stirling, on the new road betwixt Glasgow
and Edinburgh. It is chiefly inhabited by
weavers. Its situation is beautiful, being near-
ly surrounded by the pleasure-grounds and plan-
tations of Cumbernauld House. Prior to
1659 the parish of Cumbernauld formed part
of the old parish of Lenzie, which was then
partitioned into this and the parish of Kirkin-
tilloch.— Population in 1821, 2864.
CUMBRAY, (THE GREATER AND
LESSER) two islands lying in the throat of
the Firth of Clyde, betwixt the isle of Bute and
Ayrshire ; belonging to the county of Bute,
though lying nearer to the coast of Ayrshire,
from which they are distant about two miles.
The Greater or Meikle Cumbray lies highest
up the firth, and the Lesser Cumbray seems
merely a continuation of it to the south, with a
division between, consisting of a channel three
quarters of a mile broad. Betwixt the two
there are two small rocky islets. In sailing
down the Clyde, the Cumbrays appear to stop
up the estuary, a circumstance not unnoticed
by the author of the Lord of the Isles, who
alludes to them in these words :
In night the fairy prospects sink,
Where Cumbray's isles, with verdant link,
Close the fair entrance of the Clyde :
The woods of Bute, no more descried,
Are gone.
The length of the Greater Cumbray is two
and a half miles by a breadth of one and a