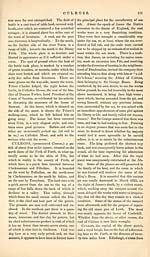 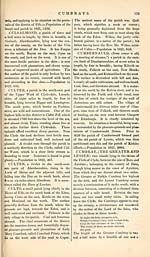 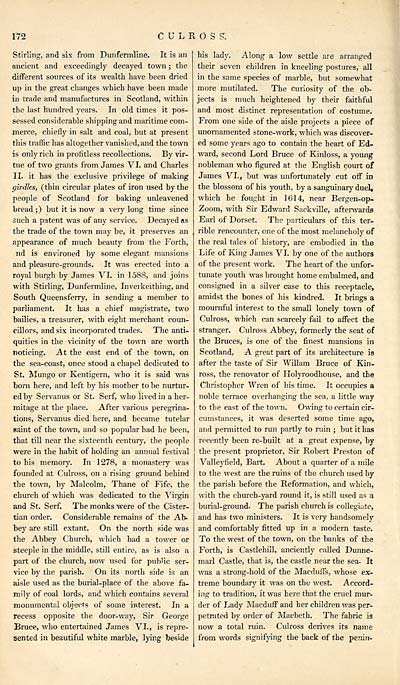 172
CULROS&
Stirling, and six from Dunfermline. It is an
ancient and exceedingly decayed town ; the
different sources of its wealth have been dried
up in the great changes which have been made
in trade and manufactures in Scotland, within
the last hundred years. In old times it pos-
sessed considerable shipping and maritime com-
merce, chiefly in salt and coal, but at present
this traffic has altogether vanished, and the town
is only rich in profitless recollections. By vir-
tue of two grants from James VI. and Charles
II. it has the exclusive privilege of making
girdles, (thin circular plates of iron used by the
people of Scotland for baking unleavened
bread ;) but it is now a very long time since
such a patent was of any service. Decayed as
the trade of the town may be, it preserves an
appearance of much beauty from the Forth,
nd is environed by some elegant mansions
and pleasure-grounds. It was erected into a
royal burgh by James VI. in 1588, and joins
with Stirling, Dunfermline, Inverkeithing, and
South Queensferry, in sending a member to
parliament. It has a chief magistrate, two
bailies, a treasurer, with eight merchant coun-
cillors, and six incorporated trades. The anti-
quities in the vicinity of the town are worth
noticing. At the east end of the town, on
the sea-coast, once stood a chapel dedicated to
St. Mungo or Kentigern, who it is said was
born here, and left by his mother to be nurtur-
ed by Servanus or St. Serf, who lived in a her-
mitage at the place. After various peregrina-
tions, Servanus died here, and became tutelar
saint of the town, and so popular had he been,
that till near the sixteenth century, the people
were in the habit of holding an animal festival
to his memory. In 1278, a monastery was
founded at Culross, on a rising ground behind
the town, by Malcolm, Thane of Fife, the
church of which was dedicated to the Virgin
and St. Serf. The monks were of the Cister-
tian order. Considerable remains of the Ab-
bey are still extant. On the north side was
the Abbey Church, which had a tower or
steeple in the middle, still entire, as is also a
part of the church, now used for public ser-
vice by the parish. On its north side is an
aisle used as the burial-place of the above fa-
mily of coal lords, and which contains several
monumental objects of some interest. In a
recess opposite the door- way, Sir George
Bruce, who entertained James VI., is repre-
sented in beautiful white marble, lying beside
his lady. Along a low settle are arranged
their seven children in kneeling postures, all
in the same species of marble, but somewhat
more mutilated. The curiosity of the ob-
jects is much heightened by their faithful
and most distinct representation of costume.
From one side of the aisle projects a piece of
unornamented stone-work, which was discover-
ed some years ago to contain the heart of Ed-
ward, second Lord Bruce of Kinloss, a young
nobleman who figured at the English court of
James VI., but was unfortunately cut off in
the blossom of his youth, by a sanguinary duel,
which he fought in 1614, near Bergen-op-
Zoom, with Sir Edward Sackville, afterwards
Earl of Dorset. The particulars of this ter-
rible rencounter, one of the most melancholy of
the real tales of history, are embodied in the
Life of King James VI. by one of the authors
of the present work. The heart of the unfor-
tunate youth was brought home embalmed, and
consigned in a silver case to this receptacle,
amidst the bones of his kindred. It brings a
mournful interest to the small lonely town of
Cidross, which can scarcely fail to affect the
stranger. Culross Abbey, formerly the seat of
the Braces, is one of the finest mansions in
Scotland. A great part of its architecture is
after the taste of Sir Willam Bruce of Kin-
ross, the renovator of Holyroodhouse, and the
Christopher Wren of his time. It occupies a
noble terrace overhanging the sea, a little way
to the east of the town. Owing to certain cir-
cumstances, it was deserted some time ago,
and permitted to run partly to ruin ; but it has
recently been re-built at a great expense, by
the present proprietor, Sir Robert Preston of
Valleyfield, Bart. About a quarter of a mile
to the west are the ruins of the church used by
the parish before the Reformation, and which,
with the church-yard round it, is still used as a
burial-ground. The parish church is collegiate,
and has two ministers. It is very handsomely
and comfortably fitted up in a modern taste.
To the west of the town, on the banks of the
Forth, is Castlehill, anciently called Dunne-
marl Castle, that is, the castle near the sea. It
was a strong-hold of the MacdufFs, whose ex-
treme boundary it was on the west. Accord-
ing to tradition, it was here that the cruel mur-
der of Lady Macduff and her children was per-
petrated by order of Macbeth. The fabric is
now a total ruin. Cidross derives its name
from words signifying the back of the penin-